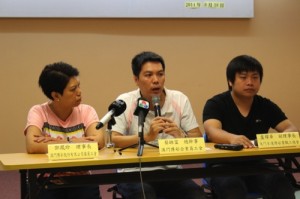 Leaders of three casino employees unions affiliated with the Macau Federation of Trade Unions (FAOM) held a press conference yesterday, alleging that several casino operators are converting part of their mass gaming areas into VIP rooms. This means that guests will be able to smoke there even after the mass area smoking ban comes into force on October 6.
They are calling for a total smoking ban in all areas within a casino so that there will be no chance for operators to exploit any legal loopholes.
Kelvin Choi Kam Fu, director-general of the Macau Gaming Enterprises Staff’s Association, stated that several unions affiliated with FAOM have received phone calls from their members who claimed that there were some large-scale renovations taking place in the mass areas of the casinos they work at. These renovations include  sealing off part of the mass area.
Choi Kam Fu said that their members are worried about whether the casinos are going to convert all the high-betting areas inside the mass area into VIP rooms, which would allow the guests there to smoke.
Moreover, the unions have received two photos sent by one of their members, which showed an internal notice about permitting guests to smoke in the so-called “smoking VIP areas” that were considered high-betting areas up until October 6.
It also included an instruction suggesting that guests who would like to enter those new VIP areas only needed to conduct a simple registration and acquire some special tokens.
Fu accused the casinos of exploiting the legal loophole and expanding VIP areas into the mass areas, violating the spirit of the mass area smoking ban.
“We all know that high-betting areas are, in definition, included in the mass area. How can casinos say they are VIP areas after October 6? Then the space of the mass area is reduced and VIP areas and high-betting areas are everywhere,” he said.
Furthermore, Choi Kam Fu believes that the expansion of VIP areas is a threat to the health of casino workers. He said that the workers in mass areas, who were supposed to enjoy a smoking-free working environment after October 6, are now forced to work in a smoking area again because of the conversion.
The director-general wants the government to clarify what constitutes a high-betting area and what is the procedure for converting a high-betting area into a VIP area.
He also asked the government not to allow the spaces that were formerly in the mass area to be converted into VIP areas.
If those areas are converted regardless, Mr Choi wants the authorities to ensure that the smoking ban will still be enforced in spaces that belonged to the mass area before October 6.
“Even if you (the government) allow [part of the mass area] to become a VIP area, smoking should still be prohibited there,” he declared.
Choi Kam Fu concluded that a total smoking ban is the only option for the government to control smoking.
“Casinos are going to exploit all sorts of loopholes as long as there is not a total smoking ban,” he said.