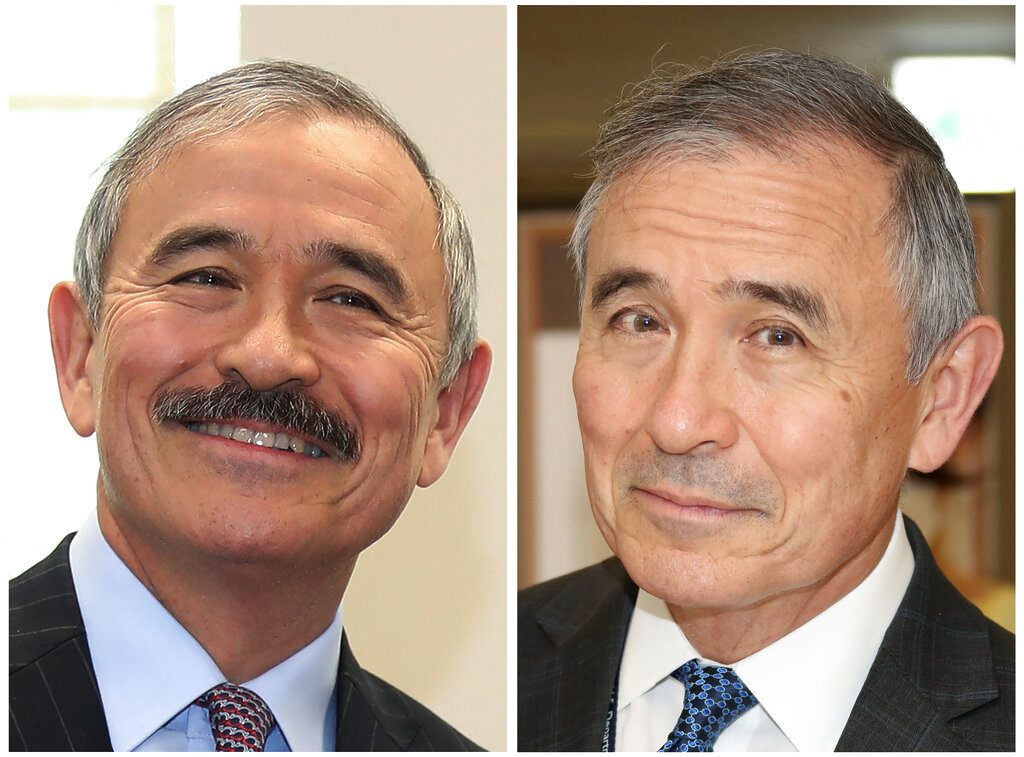 This combination of photos shows U.S. Ambassador to South Korea Harry Harris before and atfter shaving the controversial stache (Newsis, Yonhap via AP)

The U.S. ambassador to South Korea has shaved his mildly controversial mustache, saying it was too uncomfortable to keep while wearing a coronavirus mask during South Korea’s notoriously hot summer.
Harry Harris’ facial hair had drawn criticism from the media and a small number of online commentators, who compared his mustache to those worn by colonial Japanese governors during the country’s brutal rule of the Korean Peninsula from 1910 to 1945.
Harris, a retired Navy admiral who became ambassador in July 2018, acknowledged in January that his mustache had become “a point of some fascination here.” He also said he was being criticized for his ethnic background as a Japanese-American.
“Glad I did this,” Harris tweeted Saturday after his visit to a barbershop in Seoul, South Korea’s capital. “For me it was either keep the ‘stache or lose the mask. Summer in Seoul is way too hot & humid for both. #COVID guidelines matter & I’m a masked man!”
His embassy tweeted a video that showed Harris bumping elbows with a masked barber and gesturing for a shave. He playfully rolled his eyes as he lay back on a leather chair as the barber shaved his mustache and trimmed his eyebrows.
“Wow, I haven’t seen this face in years!” Harris exclaimed after washing his face and applying lotion.
In an interview last year with The Korea Times, an English-language daily, Harris said he would keep his mustache unless someone convinces him that it is “viewed in a way that hurts” the relationship between Washington and Seoul.
The newspaper said Harris’ mustache “has become associated with the latest U.S. image of being disrespectful and even coercive toward Korea.”
Relations between South Korea and Japan sank to their lowest point in decades last year as they feuded over trade issues, wartime history and military cooperation.
South Korea’s own alliance with the United States has also become shaky under the administration of President Donald Trump, who has openly complained about the costs of maintaining the 28,500 U.S. troops stationed in South Korea to protect against North Korean threats. The allies have failed to sign a new cost-sharing agreement after the last one expired at the end of 2019.