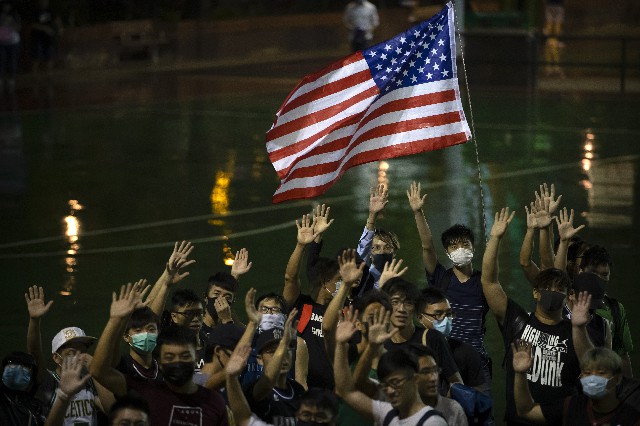 Hong Kong’s leader expressed “frustration and disappointment and regret” yesterday over steps by the U.S. Congress to support pro-democracy protesters in the territory and warns they’ll hurt American companies operating there.
Reinforcing that criticism, Chinese Foreign Ministry spokesman Geng Shuang stressed Beijing’s indignation over Congress’ move and promised unspecified countermeasures.
The House passed three bills Tuesday supporting the right of people to protest and opposing Chinese intrusions into Hong Kong’s affairs. It follows months of increasingly violent protests over Beijing’s aggressive attempts to enforce control over the semi-autonomous territory.
China has vociferously opposed all criticism of the Hong Kong government’s handling of the protests as unwarranted interference into its domestic affairs. The territory was handed over from British to Chinese rule in 1997 while retaining greater freedoms that those permitted on the Communist Party-ruled mainland.
In Hong Kong, Chief Executive Carrie Lam said, “This Hong Kong human rights and democracy act is totally unjustified and unwarranted.”
The legislation would “hurt not only the Hong Kong business. It will hurt American interests in Hong Kong. They have 1,400 companies, 85,000 citizens in Hong Kong,” Lam said.
One of the U.S. bills condemns China’s intrusions into Hong Kong’s affairs and supports the right of people to protest. Another requires annual reviews by the U.S. secretary of state of Hong Kong’s special economic and trade status, providing a check on Beijing’s influence over the territory. A third bill would ensure that U.S. weapons are not being used against protesters by police.
In his remarks to reporters at a daily briefing in Beijing, Geng said, “We express strong indignation on and firm opposition” to the legislation. “I would like to stress again that in response to the U.S.’s wrong decisions and wrong practice harming China’s interests, we will definitely take strong countermeasures to defend our sovereignty.”
Under U.S. law, Hong Kong receives special treatment in matters of trade, customs, sanctions enforcement, law enforcement cooperation and more. China has benefited from this special status and used it to evade U.S. export controls and sanctions, according to U.S. lawmakers, including speaker of the House, Nancy Pelosi.
China’s authoritarian president Xi Jinping has increasingly pounced on foreign criticism and perceived slights to rally nationalism and support for the party.
That comes amid a slowing economy and increasing repression at home, along with pushback from the U.S. and others on China’s assertions of its territorial claims in the South China Sea and a growing international backlash at perceived Chinese meddling in foreign political systems.
Under pressure from China, tech giant Apple removed a smartphone app that enabled Hong Kong protesters to track police, while the National Basketball Association has seen its once-thriving relationship with China become strained after Houston Rockets general manager Daryl Morey tweeted support for the Hong Kong protesters. Other firms have been punished for failing to toe China’s line on Taiwan, human rights and other sensitive issues.
The three bills passed in the House now head to the Senate. A spokesman for Senate Majority Leader Mitch McConnell said Tuesday he had no scheduling announcement.
The Senate Appropriations Committee last month advanced an amendment that McConnell said would ensure “the U.S. maintains a watchful eye on the Chinese government’s aggressive encroachment on Hong Kong.” MDT/AP