US senator says China, America ‘competitors but not adversaries’ 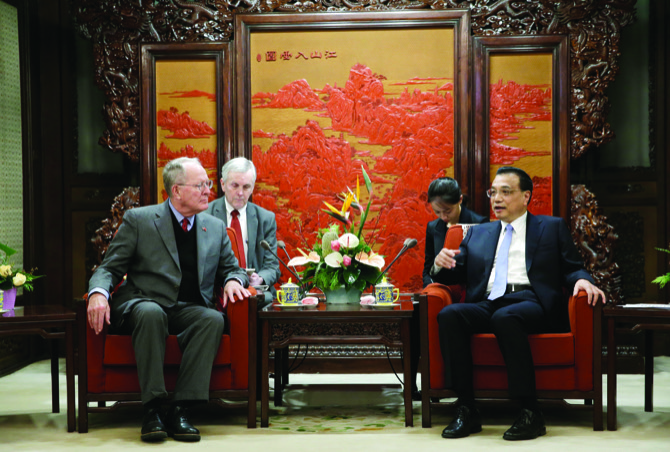 China and America are “competitors but not adversaries,” U.S. Sen. Lamar Alexander told Chinese Premier Li Keqiang yesterday, despite a spiraling trade war and other tensions that have pushed relations to their lowest point in years.

The upbeat message at their meeting in Beijing came amid concerns that the U.S.-China trade dispute will drag on, hurting company profits and the overall U.S. economy. Tensions have also arisen over China’s claims to Taiwan and the South China Sea, allegations of Chinese theft of commercial secrets and accusations of meddling in American politics.

Coming a week ahead of the U.S. midterm elections, the visit by Alexander at the head of a seven-member delegation of Republican senators and congress members seemed all the more extraordinary. All are strong supporters of U.S. President Donald Trump, who has slapped tariffs on USD250 billion in Chinese products and threatened much more.

“Your country and our country are competitors but not adversaries and we believe that with mutual respect we can continue to prosper together,” Alexander said. While he said the delegation wished to discuss trade, he offered no specifics in opening remarks before reporters were ushered from the room.

In his comments, Li said he hoped the U.S. will meet China halfway to “have the wisdom to overcome the obstacles and move our relationship forward on an even sounder track.”

“This not only benefits our two countries, but also benefits the entire world,” Li said.

Along with criticizing China’s large trade surplus with the U.S., Trump has targeted China’s efforts to transform itself into a global leader in robotics, artificial intelligence and other technology industries.

Beijing has spent heavily to build up Jinhua and other chip makers as part of efforts to transform China into a global leader in robotics, artificial intelligence and other technology industries.

The order marks the second U.S. action this year blocking technology exports to a Chinese buyer.

ZTE Corp., China’s second-biggest maker of telecoms equipment, faced possible bankruptcy this year after Washington imposed a seven-year ban on sales of U.S. technology to the company over its exports to Iran and North Korea.

Meanwhile, Jinhua is embroiled in a court battle with U.S. chip maker Micron Technology Inc., which accuses the Chinese company of stealing its technology.

Trump’s tariffs of up to 25 percent are sparking a Chinese backlash. China has struck back with duties on soybeans and pork, affecting farmers in the Midwest, a region that supported the president in his 2016 campaign.

Other aspects of Trump’s tariff tactics have elicited concern even from within his own party. Alexander has co-sponsored legislation that would require the independent International Trade Commission to conduct a study of the auto industry before tariffs on vehicles could be imposed. MDT/AP