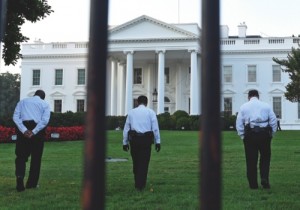 The Secret Service chief has stepped-up security outside the White House after a man with a knife who jumped the fence made it into the presidential residence before being apprehended, officials said.
President Barack Obama insisted Saturday he still has confidence in the beleaguered agency’s ability to protect him and his family.
Secret Service Director Julia Pierson ordered enhanced officer patrols and surveillance along the North Fence of the compound just after the incident on Friday evening, which triggered a rare evacuation of the White House as well as renewed scrutiny of the Secret Service. The agency said Pierson had also ordered a comprehensive review of what happened.
“The president has full confidence in the Secret Service and is grateful to the men and women who day in and day out protect himself, his family and the White House,” said White House spokesman Frank Benenati.
The presidential vote of confidence came as the storied agency sought to dispel growing concerns about security at the White House, one of the most heavily protected buildings in the world. Another man was arrested Saturday outside the White House in an unrelated event.
President Barack Obama and his daughters had just left the White House by helicopter on Friday evening when the Secret Service says 42-year-old Omar J. Gonzalez scaled the fence, darting across the lawn and through the unlocked North Portico doors before officers finally tackled him.
“Although last night the officers showed tremendous restraint and discipline in dealing with this subject, the location of Gonzalez’s arrest is not acceptable,” the agency said in a statement.
The Secret Service’s Office of Professional Responsibility was carrying out the review, which started Friday with interviews and a physical site assessment and will include a review of all of the security and operational policies, officials said.
Officials had originally said that Gonzalez appeared unarmed as he sprinted across the lawn — potentially one reason agents didn’t shoot him or release their service dogs to detain him. But Gonzalez had a small folding knife with a 9 centimeter serrated blade at the time of the arrest and faces a weapons charge, according to a criminal complaint issued late Friday.
According to a criminal complaint, when Gonzalez was apprehended he told Secret Service agents he was “concerned that the atmosphere was collapsing” and needed to contact the president “so he could get word out to the people.”
Gonzalez, of Texas, was transported to a nearby hospital after his arrest for evaluation. He was expected to appear in federal court today to face charges of unlawfully entering a restricted building or grounds while carrying a deadly or dangerous weapon.
Less than 24 hours after Gonzalez’ arrest, a second man was apprehended after he drove up to a White House gate and refused to leave, the Secret Service said, prompting bomb technicians in full gear to search the vehicle as agents shut down nearby streets.
There were no indications the two events were connected. Yet the pair of incidents in short succession only intensified the scrutiny of the Secret Service, which is still struggling to rehabilitate its image following a series of allegations of misconduct by agents in recent years, including agents on Obama’s detail. Josh Lederman, Washington, AP