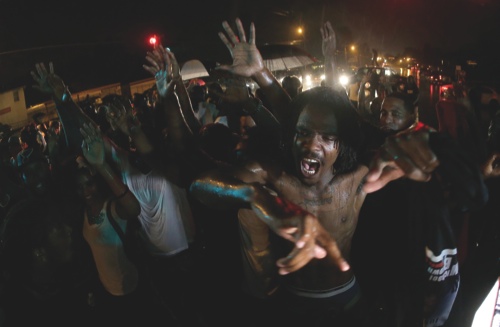 People defy a curfew, before smoke and tear gas was fired to disperse a crowd protesting the shooting of teenager Michael Brown

Seven people were arrested early yesterday morning as police used smoke and tear gas against protesters who defied a curfew in a St. Louis suburb where a black teen walking down the street had been shot by a white police officer.
Police moved armored vehicles down the street in in Ferguson, Missouri, just after the start of the curfew yesterday. They used smoke and tear gas on protesters who refused to move back, essentially ending the confrontation nearly an hour after the midnight curfew. Seven people were arrested for failure to disperse.
Saturday marked a week since a white Ferguson officer, Darren Wilson, shot and killed 18-year-old Michael Brown on Aug. 9. The shooting ignited racial tension in the mostly-black suburb and has led to looting and several run-ins between police and protesters.
Patrol Capt. Ron Johnson said the timing of police action yesterday was coincidental.
Police received a report that people broke into a barbecue restaurant and some were on the roof — creating a potential danger for officers trying to disperse the protesters. Police were responding to that report — not the fact that protesters were still on the street after curfew, Johnson said.
Things got worse when a man with a handgun went into the street as police were nearing the restaurant. He ran away, but there was plenty of violence. A man was shot and critically wounded in the same area. Police were searching for the shooter. Someone shot at a police car — it wasn’t clear if it was hit.
Hundreds of other protesters left peacefully before the curfew took effect. But remaining protesters — chanting “No justice! No curfew!” — refused to leave the area.
As officers put on gas masks, a chant from the distant crowd emerged: “We have the right to assemble peacefully.” A moment later, police began firing canisters into the crowd of protesters.
Highway Patrol Spokesman Lt. John Hotz initially said police only used smoke, but later told The Associated Press that they also fired tear gas canisters.
Jayson Ross, who was leading the protesters toward police before the canisters were fired, said: “They got guns. We got guns. We are ready.”
Gov. Jay Nixon on Saturday declared a state of emergency in Ferguson. The curfew announcement came after tensions again flared in Ferguson late Friday night. Earlier that day, local police identified the officer who shot Brown as Darren Wilson and released documents and video footage alleging that Brown had robbed a convenience store just before he was shot. Police said Wilson was unaware Brown was a suspect when he encountered him walking in the street with a friend.
Nixon said the U.S. Department of Justice is widening its civil rights investigation of the shooting.
Missouri State Highway Patrol Capt. Ron Johnson, who is in charge of security in Ferguson, said 40 FBI agents were going door-to-door in the neighborhood starting Saturday, talking to people who might have seen or have information about the shooting. AP