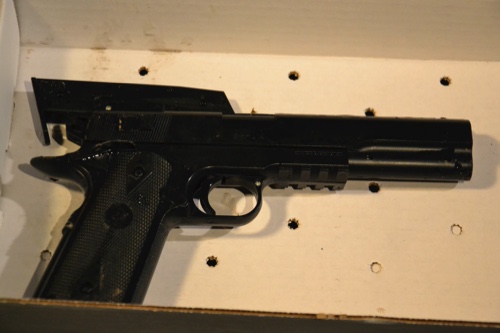 A 12-year-old boy was fatally shot by police in Cleveland after brandishing what turned out to be a replica gun, triggering an investigation into his death and a legislator’s call for such weapons to be brightly colored or bear special markings.
The boy, identified by the Cuyahoga County medical examiner as Tamir Rice, died from his wounds Sunday, a day after officers responded to a 911 call about someone waving a “probably fake” gun at a playground.
Deputy Chief Ed Tomba said one officer fired twice after the boy pulled the fake weapon — which was lacking the orange safety indicator usually found on the muzzle — from his waistband but had not pointed it at police. The boy did not make any verbal threats but grabbed the replica handgun after being told to raise his hands, Tomba said.
“That’s when the officer fired,” he said.
Police described the weapon as an “airsoft” type replica that resembled a semi-automatic handgun. The orange safety indicator had been removed, police said.
The two officers involved in the shooting have been placed on administrative leave, which is standard procedure. The Cleveland Plain Dealer reported that the officers are a first-year rookie and a 10-year department veteran.
The police department has collected surveillance video and other evidence and will present it to the county prosecutor’s office, the newspaper said without citing a source. It said after reviewing the evidence prosecutors will present the case to a grand jury, which will decide whether the officer was justified in using force against the boy.
An attorney for the boy’s family, Timothy Kucharski, said Tamir went to the park with friends Saturday afternoon, but he did not know the details of what led to his shooting.
“I don’t want to make a rush to judgment,” he said.
A man who called 911 told dispatchers the boy was on a swing set and pointing a pistol that was “probably fake” and scaring everyone.
The caller said the boy was pulling the gun in and out of his pants.
“I don’t know if it’s real or not,” the caller said.
Jeff Follmer, president of the Cleveland Police Patrolmen’s Association, said the officers were not told the caller thought the gun might be fake. AP