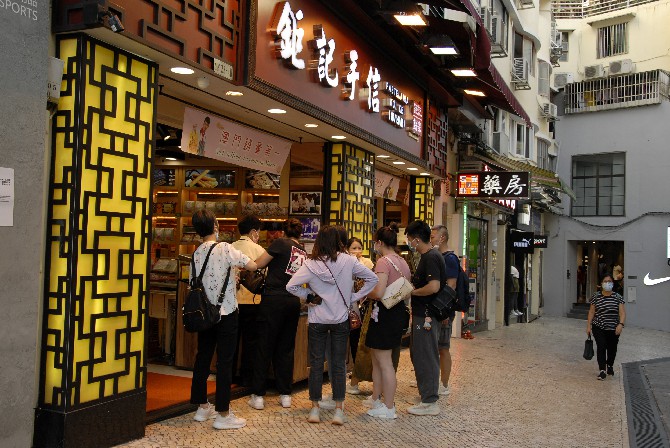 Total visitor spending (excluding gaming expenses) grew 15.9% quarter-to-quarter to MOP7.16 billion in the second quarter of 2021. This growth can be attributed to the 25.9% increase in visitor arrivals.
Data from the Statistics and Census Service from March to June shows that the total spending of overnight visitors (MOP6.38 billion) and same-day visitors (MOP777 million) rose 14.1% and 32% quarter-to-quarter respectively, despite the downturn in tourist arrivals in June due to the new outbreak in neighboring regions.
In the first half of 2021, total visitor spending amounted to MOP13.34 billion.
From May to June, the city reached nearly 2.15 million visitor arrivals. However, June recorded a sharp drop, mainly attributed to stricter anti-pandemic measures implemented in both Guangdong province and Macau in early June, designed to contain the fresh wave of Covid-19 cases.
Per capita visitor spending was MOP3,271 in the second quarter, a drop of 8.0% quarter-to-quarter.
Visitor spending from mainland China dropped 6% quarter-to-quarter to MOP3,427 per capita, with the spending of people travelling under the Individual Visit Scheme (MOP6,673) falling by 6.4%. Overnight visitors spent MOP5,603 on average, a decrease of 7.9% quarter-to-quarter.
In the second quarter, visitors mostly spent on shopping (65% of per capita spending), food and beverage (15.9%) and accommodation (15.4%).
Recently, several lawmakers called on the government to bring forward some sort of economic stimulus for the city’s travel industry and small and medium enterprises — considered the industries hardest-hit by the Covid-19 pandemic — to ease their financial hardship during the resurgence.