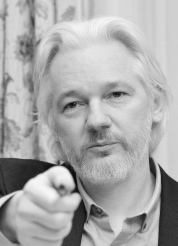 WikiLeaks founder Julian Assange sowed confusion yesterday with an announcement that appeared to indicate he was leaving his embassy bolt hole, but his spokesman later clarified that that would not happen unless the impasse over his extradition were resolved.
Assange made the cryptic comments during a press conference at the Ecuadorean Embassy in London following a meeting with Ricardo Patino, the Latin American nation’s foreign minister. When asked about speculation — some of it sparked by a recent interview with a British newspaper — that the 43-year-old Australian was ready to leave the embassy to seek medical treatment, Assange declined to answer directly, instead pointing to Kristinn Hrafnsson, the WikiLeaks spokesman, who was in the back of the room.
“He said I can confirm that I am leaving the embassy soon, but perhaps not for the reasons that (news media) are saying,” Assange said.
He refused to elaborate on the awkwardly worded statement.
Leaving the embassy would be a big move for Assange, who has remained trapped in the building since he sought refuge there more than two years ago. Assange is seeking to avoid extradition to Sweden, where he is wanted over sex crimes allegations, or the United States, where authorities are investigating his spectacular disclosures of secret information.
As bewildered journalists huddled after the press conference, Hrafnsson said that what Assange meant to convey was that he was ready to leave the embassy as soon as the British government gave him the guarantees he was seeking, namely the right to travel freely to Ecuador where he has asylum.
“The plan is to leave as soon as the U.K. government decides to honor its obligations,” Hrafnsson said, repeating Assange’s long-held position.
That seems unlikely anytime soon. Patino said yesterday negotiations between Ecuador and the U.K. remain deadlocked. AP