CHINA An outspoken Chinese minority scholar has been indicted on separatism charges amid continuing anti-government violence in the country’s far west. The prosecutor’s office in the Xinjiang regional capital of Urumqi made the announcement about economics professor Ilham Tohti in a brief online statement yesterday. 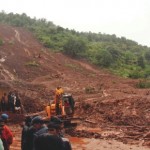 INDIA Torrential rains triggered a massive landslide that buried a remote village in western India yesterday, killing at least 17 people as it swept away scores of houses and possibly trapping many more people under debris, officials said.

INDIA An Indian court convicts 10 people in a 2004 fire that tore through a thatched-roof schoolhouse, killing 94 children in a horrifying case that focused attention on poor fire regulations in the country. The owner of the primary school, his wife, the headmistress and the meal planner were among those convicted of culpable homicide and endangerment.

PHILIPPINES The release of four police officers abducted by Filipino communist guerrillas sparks hopes that stalled peace talks will resume, although major obstacles remain. New People’s Army rebels released the police officers they seized in a July 10 attack on a police station in the remote southern town of Alegria in Surigao del Norte province, saying it was a goodwill gesture to promote peace negotiations and a response to appeals by the policemen’s families.
PAKISTAN Security forces in a troubled northwestern tribal region foil an overnight cross-border attack from Afghanistan, killing six militants, two military officials say. The foreign ministry lodged a protest over the attack on a Pakistani border post and urged Kabul to take steps to eliminate “terrorist sanctuaries” on Afghan soil. It was a telling reversal for Pakistan, which for years has been accused by both Afghanistan and the United States of harboring insurgents that carry out such attacks from its side of the border.

SYRIA The Syrian government is still indiscriminately bombing civilians with explosives-filled barrels in defiance of a U.N. Security Council resolution, an international human rights group said yesterday. Human Rights Watch’s statement came as the Security Council is expected to meet later in the day for a fifth round of reporting on the resolution.

UK British officials have held a crisis meeting and warned of a potentially serious threat if the deadly Ebola virus spreads further. Foreign Secretary Philip Hammond yesterday said there are no known cases in Britain, but that the incurable disease is viewed by the government as a “very serious threat.” Health officials are being warned to be vigilant for symptoms of the virus. There are concerns it may spread from West Africa, where the current outbreak has already killed hundreds of people.

UK British officials says driverless cars will be tested on roads in as many as three cities in a trial program to begin in January. Officials said yesterday the tests will last up to three years. Sensors and cameras will guide the cars. The plan will include two types of driverless technology. One places a driver in the car who can take the controls if needed; another calls for a fully autonomous vehicle with no driver present.