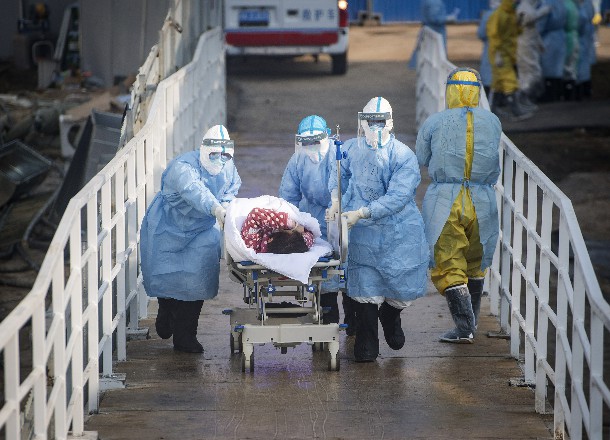 With more than 20,000 cases reported, China has begun moving patients suffering from a new virus into rapidly built or adapted facilities, although the degree of medical isolation among them appears to vary widely.
The first 50 patients were moved yesterday into Huoshenshan Hospital, a prefabricated structure on the outskirts of the city of Wuhan, the epicenter of the outbreak. Earlier footage appeared to show the 1,000-bed facility equipped with state-of-the-art medical equipment, including negative-pressure isolation wards to prevent the virus from breaking the air seal. A second hospital, Leishenshan, is due to be ready soon and will add another 1,600 beds.
Elsewhere in Wuhan, authorities are converting a gymnasium, exhibition hall and cultural center into hospitals with a total of 3,400 beds to treat patients with mild symptoms of the virus. Television footage of those facilities showed beds placed in tight rows in large rooms without dividers between them.
Here’s an update of the world reaction to the health crisis:

Singapore
The city-state has reported six more cases of the new virus, raising its number of confirmed infections to 24. The health ministry said four cases involved human-to-human transmission and the other two were Singaporeans who were evacuated from Wuhan, the Chinese city at the center of the outbreak. It said there is no evidence of widespread sustained community contagion in Singapore.
It said two of the Singaporean women worked in a health product shop patronized by Chinese tourists, while another woman was a tour guide who brought tour groups to the shop. The fourth woman was the Indonesian maid of one of the Singaporean women working in the health shop.
The ministry said the tour guide and the two women working at the shop had prolonged interaction with Chinese travelers, including at least two from Guangxi who were confirmed to have the virus. It said the tour guide showed no symptoms when she went to the National Center for Infectious Disease on Monday but tests confirmed yesterday she has the virus.
Similarly, it said the two Singaporeans who returned from Wuhan showed no symptoms when they tested positive Monday.
It said all Singaporeans returning from Wuhan have been tested for the virus.

Indonesia
Authorities in Indonesia’s tourist island of Bali have rejected East Timor’s request to quarantine its 17 citizens due to be evacuated from Wuhan following the deadly virus outbreak in China.
Ketut Suarjaya, who heads Bali’s Health Provincial Office, says an official response was sent to East Timor’s government on Tuesday through the Indonesian embassy in Dili.
Bali Vice Gov. Tjokorda Oka Artha Ardhana Sukawati told reporters earlier that East Timor’s government had asked for Indonesia’s assistance in quarantining its 17 nationals, all students, in Bali for up to three weeks when they land on the resort island.
Sukawati says that “tourism stockholders in Bali did not agree because we would maintain Bali as a safe place for tourism.”
Indonesia’s Foreign Minister Retno Marsudi said Sunday that the government would temporarily suspend all flights to and from the Chinese mainland as of Wednesday.
She also said the country has officially suspended the visa-free and on-arrival visa policy for all Chinese citizens after the outbreak of the coronavirus. The ban also applies to foreign nationals who have traveled to China in the past 14 days.
The government decision to quarantine Indonesian nationals evacuated from Wuhan on a remote Natuna island has sparked anger among residents. Hundreds of people burned tires during weekend protests near the naval base where some 238 evacuees were brought Sunday and are being isolated for 14 days.
Malaysia
More than 100 Malaysians have been quarantined after being evacuated from the Chinese city at the center of a viral outbreak.
An AirAsia plane carrying 107 Malaysians and their non-Malaysians spouses and children from Wuhan landed at the Kuala Lumpur airport early yesterday.
They immediately underwent medical screenings, and the National Disaster Management Agency said two people who didn’t pass the screenings were immediately taken to the hospital.
Its statement said the others were sent to a surveillance center in southern Negeri Sembilan state to be quarantined for 14 days.
Malaysia has recorded eight cases of the new type of coronavirus, all involving Chinese travelers.

Japan
Japan Airlines says it is canceling some flights to and from China and reducing seats on other flights because of a virus outbreak that has led to a sharp decline in travel demand and growing global travel restrictions.
JAL says in a statement that flights to China will be reduced from 98 to 43 flights per week between Feb. 17 and March 28, and some flights prior to Feb. 16 may also be affected.
The flights connect Tokyo with Beijing and Shanghai, as well as other cities such as Guangzhou, Dalian and Tianjin.
Separately, All Nippon Airways said that it will temporarily decrease or suspend flights to and from Chinese cities.
ANA says that the seven roundtrip flights a week connecting Narita and Beijing will be canceled from Feb. 10 through March 29
The 14 weekly round-trip flights connecting Haneda and Beijing will be reduced to seven a week over the same period.

Cambodia
Prime Minister Hun Sen said he will visit Wuhan, the Chinese city at the center of a new virus outbreak, to meet with students from his country studying there.
Hun Sen said on his Facebook page that he would fly today to Wuhan from South Korea’s capital, Seoul.
He initially said Chinese authorities had agreed to the trip but later updated his posting to say he was awaiting permission.
There are no commercial flights currently operating from Seoul to Wuhan, and Hun Sen didn’t explain how he would get there. He is in Seoul for a conference organized by a private group.
Hun Sen said he plans to give moral support to the students in Wuhan and tell them not to fear the virus. A number of other countries have evacuated their citizens from the city.
He told Cambodians in a television broadcast last week that the virus does not threaten them, and he would not ban flights from China.
The virus has sickened more than 20,600 people worldwide, most of them in China. More than 420 have died.

UK
British Foreign Secretary Dominic Raab has urged all British citizens in China to leave because of the outbreak of the new virus.
The Foreign Office said in an updated travel advisory yesterday that it advises against “all but essential” travel to mainland China.
Raab said the government now advises British citizens in China “to leave the country if they can, to minimize their risk of exposure to the virus.’’
The Foreign Office said it is continuing to work to evacuate British citizens from the epicenter of the virus outbreak, Hubei province.

Belgium
Authorities have reported its first case of a new virus in a person who was repatriated from the Chinese epicenter of the outbreak.
The health ministry said yesterday the person was in good health and does not show any symptoms of the disease. The individual was among nine Belgians repatriated from Wuhan, China, over the weekend.
The infected person was taken to a special hospital for further care while the other returnees remain under observation. MDT/AP