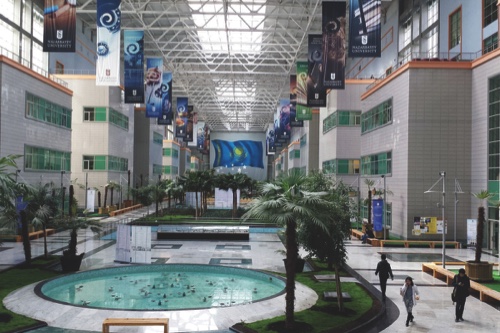 President Xi Jinping’s grand plan to make China the center of the world again by reviving the ancient Silk Road trading route faces obstacles at its first stop.
In Kazakhstan, through which Xi envisages pipelines, roads and railways revitalizing an economic belt that stretches half way around the world to Venice, China has struggled to gain a significant foothold. It’s failed in efforts to realize a free trade agreement mooted 22 years ago and, in 2009, the Kazakh president was forced to deny a plan to lease farmland to China after angry protests from a public wary of their neighbor’s growing power.
What’s more, Xi’s vision for a bloc that involves at least 60 countries has left government advisers from Almaty to Delhi largely in the dark about the details. While Kazakhstan’s leaders have voiced support, enticed by billions of dollars in infrastructure funding, analysts in the country say the strategy involves greater Chinese influence that may be a harder sell to its people.
“Xi’s proposed idea is to form the foundation of a new geopolitical concept of China,” said Konstantin Syroezhkin, an adviser to the Kazakh president. “All discussions before were mainly around the economic component of China’s relations with this region, but Xi has put forth a vision that is much broader.”
China’s leader is staking political capital on the Silk Road, which started from his home province of Shaanxi and represented the golden years of Chinese civilization. During the Han Dynasty that ruled for four centuries from around 200 B.C. and the Tang Dynasty from the seventh century, the route made China’s economic and trade prowess the envy of the world.
It’s part of Xi’s “Chinese dream” to rejuvenate the Middle Kingdom and expand its sphere of influence beyond economics to politics and culture at a time when the U.S. is seeking to reassert itself in the region. A second, maritime, Silk Road that traverses the Horn of Africa en route to Europe, was later unveiled by Xi in Jakarta.
Earlier this month, Xi pledged USD40 billion to set up a Silk Road Fund that will finance the construction of infrastructure along the route. The plan was hailed by Chinese manufacturers such as equipment maker Zoomlion Heavy Industry Science and Technology Co., which aims to raise the proportion of overseas sales to total revenue to between 30 percent and 40 percent within five years from 10 percent at the moment, Shanghai Securities News reported yesterday, citing Senior President Zhang Jianguo.
China may need more than money to succeed in places like Kazakhstan, a former Soviet state on China’s western border, which is happy to do business with its neighbor but hasn’t been so keen on building a close friendship.
“China is too powerful, too strong, and we’re afraid of being overwhelmed,” said Nargis Kassenova, director of the Central Asian Studies Center at KIMEP University in Almaty. “It’s hard to turn down on what China can offer, but we resist the full embrace of Chinese power. We’re just trying to benefit economically.”
China surpassed Russia as Kazakhstan’s top trading partner in 2010 and trade with the five former Soviet republics in Central Asia has jumped more than 20 times to $46 billion in 2012 from $1.8 billion in 2000, according to data from China’s Ministry of Commerce. Lying on some of the world’s biggest oil and gas reserves, Kazakhstan signed cooperation contracts and agreements worth $30 billion last year to help slake its neighbor’s thirst for energy.
When Xi visited Kazakhstan in September last year, he outlined a much more comprehensive relationship in a speech at the Senate Hall of Nazarbayev University. Besides dangling the carrot of an unparalleled market of almost 3 billion people along the New Silk Road Economic Belt to Europe, he urged all countries involved to support each other on issues concerning sovereignty, territorial integrity and security, while cracking down on the “evil forces” of terrorism, extremism and separatism.
“The Silk Road Economic Belt needs to be seen as a key part of the foreign policy legacy that Xi Jinping is building for himself,” Raffaello Pantucci, director of International Security Studies at the London-based Royal United Services Institute, said in an interview in Almaty. “It has the effect of both helping the domestic situation in western China, but also growing China’s power and influence across the Eurasian landmass.”
The Silk Road may help China build a bulwark against the U.S., which is strengthening military ties with treaty allies and pushing a Pacific trade deal, said Jin Canrong, Associate Dean of the School of International Studies at Renmin University in Beijing.
“If the plan gets implemented well and achieves what it’s meant to, it will become an important legacy of Xi,” Jin said. “He’ll be remembered as the great leader to rejuvenate the Middle Kingdom. But this is a long shot, as it will need at least three decades.” Ting Shi, Bloomberg