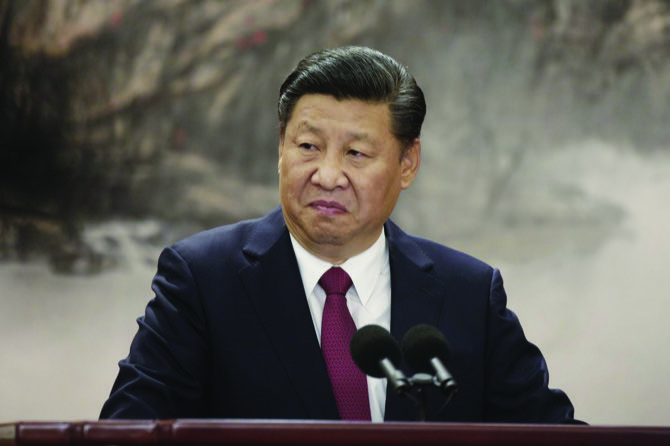 Chinese President Xi Jinping urged the ruling Communist Party to brace for a “long-term” struggle against a variety of threats, the latest in a series of warnings to a nation facing aslowing economy and a more confrontational U.S.

Xi said officials needed to display a “fighting spirit” to overcome challenges ranging from security concerns to financial risks, according to the official Xinhua News Agency. “The struggles we face will not be short term, but long term,” Xi told a cadre training course Tuesday in Beijing, adding that difficulties would persist through at least 2049, the 100th anniversary of the People’s Republic of China.

Xi opened the year by stressing the need to maintain political stability as the economy slows. China is projected to see the slowest growth in gross domestic product in almost three decades this year — a concern made worse by the trade war with U.S. President Donald Trump.

Xi’s latest remarks come just weeks before the party’s decision-making Central Committee is expected to hold its first full meeting in 20 months. The leaders will meet during a period of triumphant anniversaries for the ruling party, with Xi expected to preside over a military parade to mark the country’s 70th anniversary on Oct. 1.

However, that spirit of triumph was missing from Xi’s speech.

“At present and into the future, China’s development is entering to a period when various risks and challenges are emerging together,” Xi said, listing concerns including the economy, defense, Hong Kong and Taiwan. “And it will only get more complex.”

China is facing greater international push back as Trump piles tariffs on the country’s goods in an effort to secure concessions on trade, technology, and economic access. That dispute has exacerbated concerns about China’s slowdown and contributed to diplomatic tensions over pro-democracy protests in Hong Kong and American military support for Taiwan.

The speech was followed up Wednesday by a toughly worded front-page commentary in the party’s flagship People’s Daily newspaper, which chided “some cadres, especially the young ones” for lacking the necessary fighting spirit. Some were “weak-kneed and unwilling to fight,” the commentary said, adding that such a political party or country wouldn’t be “far from peril.”

State media have stepped up their propaganda efforts around Xi recently, especially since his return from the annual summer retreat at Beidaihe. Official news reports and documentaries have taken to describing Xi as “the People’s Leader,” an honorific previously reserved for Mao.

Xi’s speech included numerous war-like metaphors, including exhorting party officials to “be both commanders and combatants, and cultivate and maintain a strong fighting spirit, have tenacious will and superb fighting skills.” Bloomberg