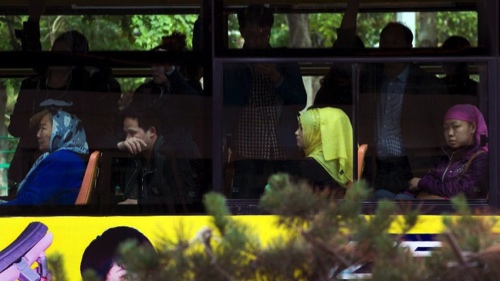 China plans to adopt the same family planning policies for all ethnic groups in Xinjiang, the western province’s Communist Party chief wrote in an essay, while a spate of new rules have also focused restrictions on Islamic dress, signaling further curbs for the Uighur Muslim minority.
Southern Xinjiang will “implement family planning policy equally on all ethnic groups, to lower and stabilize an appropriate birth rate,” Zhang Chunxian wrote in the August edition of Qiushi, an official magazine of the party.
Zhang’s remarks may indicate a shift in rules that let Uighurs have as many as three children in the countryside, while Han Chinese can have two. Even though about 92 percent of China’s 1.3 billion population is Han, more than 45 percent of Xinjiang’s 22 million people are Uighurs, a Muslim people from eastern and central Asia.
The essay was published as authorities tighten security amid ethnic violence in the region that last week saw as many as 96 people killed. Unrest by Uighur separatists has been on the rise in Xinjiang and beyond, prompting President Xi Jinping to order a crackdown earlier this year.
New rules have also focused on the personal lives of residents, with beards and Islamic veils not permitted on buses in Xinjiang’s Karamay city, local media reported yesterday.
Under current rules, Uighurs can have two children in urban areas while Han Chinese are in general only allowed one.
Uighurs are supposed to be exempt from China’s one-child policy. Yet under the policy, four Uighur women in Hotan prefecture in Xinjiang were forced to undergo forced abortions, Radio Free Asia reported in December.
Increasing restrictions on ethnic minorities in Xinjiang come as China relaxes its one-child policy across the country. The Standing Committee of the National People’s Congress in late November approved rules that allow couples to apply for permission to have a second child where either parent is an only offspring.
China introduced the one-child policy in 1979 after the population jumped more than 70 percent in the three decades following the party’s civil war victory. Bloomberg