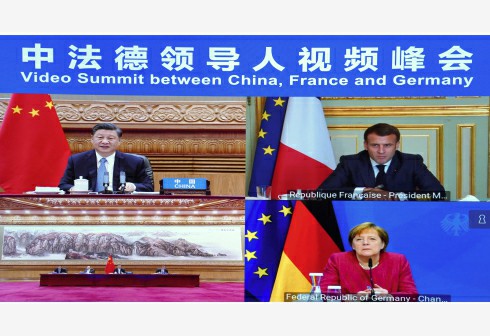 The choice is in our hands and the responsibility falls on our shoulders.”
That was what Chinese President Xi Jinping, also general secretary of the Communist Party of China (CPC) Central Committee, said during the CPC and World Political Parties Summit held via video link on Tuesday, as he called on political parties in the world to shoulder their responsibility for the pursuit of people’s wellbeing and progress of mankind.
Xi’s speech is “visionary and insightful,” said Argentine President Alberto Fernandez, also president of the country’s Justicialist Party.
The cloud summit, which gathered leaders of more than 500 political parties and organizations from over 160 countries, was the latest of an array of diplomatic occasions where the Chinese leader offered China’s solutions to daunting challenges facing humanity.
By attending six important multilateral events, and engaging in nearly 100 phone calls, messages and virtual meetings in the form of “cloud diplomacy” this year, Xi has made such pledges and proposals on the anti-pandemic fight, common development, environmental governance and multilateralism that keep resonating across the world.

ANTI-PANDEMIC FIGHT
In a phone conversation held on Jan. 28 with his Bolivian counterpart, Luis Arce, Xi said China is willing to strengthen cooperation with Bolivia on COVID-19 vaccines.
Recalling that China has provided Bolivia with material and technical assistance to fight the epidemic through various channels, the Chinese president said his country will continue supporting Bolivia in the anti-epidemic fight within its capacity.
Some 27 days later, Chinese Sinopharm COVID-19 vaccines arrived at Viru Viru International Airport in the Latin American country.
Ever since the onset of the COVID-19 pandemic, Xi has repeatedly stressed on the importance of global anti-pandemic cooperation.
Xi, in late May at the Global Health Summit, made a five-point proposal at the summit, namely putting people and their lives first, following science-based policies and ensuring a coordinated and systemic response, sticking together and promoting solidarity and cooperation, upholding fairness and equity to close the immunization gap, and addressing both the symptoms and root causes to improve the governance system.
China has provided more than 480 million doses of COVID-19 vaccines to nearly 100 countries, and pledged to provide the first batch of 10 million doses of vaccines to the World Health Organization (WHO) -led COVAX.
“COVID-19 has shown how a small virus has actually frozen us globally, our movement, our activities, [and] our interaction,” former Malaysian Ambassador to China Abdul Majid Ahmad Khan told Xinhua.
“So the only way to combat this is through cooperation, through the sharing of common interest, I think that is the way forward.”
As the whole world is facing unprecedented challenges, mutual respect, mutual help, reaching consensus through consultation and close cooperation have become more urgent than ever, said Serbian President Aleksandar Vucic.

COMMON DEVELOPMENT
From May 7-10, the first China International Consumer Products Expo (CICPE) was held in Haikou, the capital of south China’s Hainan Province.
A total of 70 countries and regions attended the four-day expo, and 2,628 brands of 1,505 enterprises from home and abroad participated in the exhibitions.
In his congratulatory message to the expo, Xi said the expo, serving as a global platform of displaying and trading high-end consumer products, is conducive to all countries sharing opportunities provided by the Chinese market and conducive to global economic recovery and growth. It will also enable China to offer the world more quality consumer products.
Apart from the CICPE, other high-end international expos such as the decades-old Canton Fair and the 3-year-old China International Import Expo have also demonstrated China’s commitment to wider opening-up and mutual benefits. China has done its best to promote South-South cooperation and provide assistance for developing countries, Xi said in a phone conversation with United Nations (UN) Secretary-General Antonio Guterres in early May, adding that this is China’s consistent practice as well as its moral responsibility.
Since the first China-Europe freight train left southwest China’s Chongqing Municipality in March 2011, China has launched the service in more than 60 cities domestically, connecting them with major European countries, which has recorded more than 40,000 trips.
Just as Xi said in late April at the opening ceremony of the Boao Forum for Asia Annual Conference 2021, “the BRI is a public road open to all, not a private path owned by one single party.”
“Going forward, we will continue to work with other parties in high-quality Belt and Road cooperation,” Xi said, adding, “We will act in the spirit of openness and inclusiveness as we work with all willing participants to build the BRI into a pathway to poverty alleviation and growth.”

ENVIRONMENTAL GOVERNANCE
“Faced with unprecedented challenges in global environmental governance, the international community needs to come up with unprecedented ambition and action.
We need to act with a sense of responsibility and unity, and work together to foster a community of life for man and Nature,” Xi said in late April at the virtual Leaders Summit on Climate.
Through various similar occasions, Xi has reiterated the importance of closer cooperation in green development.
On May 19, Xi and his Russian counterpart, Vladimir Putin, witnessed the groundbreaking ceremony of a bilateral nuclear energy cooperation project of Tianwan nuclear power plant and Xudapu nuclear power plant, via video link. It is necessary to promote the building of a global energy governance system featuring justice, equity, balance, inclusiveness, openness and shared benefits, and contribute more solutions to global energy governance, Xi said at the ceremony, adding, “Responding to climate change is a common task for all countries.”
China is ready to work with Europe to ensure positive outcomes at the COP15, and the 26th session of the Conference of the Parties of the UN Framework Convention on Climate Change, Xi said Monday during a virtual summit with French President Emmanuel Macron and German Chancellor Angela Merkel.

UPHOLDING MULTILATERALISM
On June 28, Xi and Putin issued a joint statement, in which the two heads of state pledged to protect global strategic security and stability, support and practice true multilateralism, oppose interference in other countries’ affairs under the guise of “democracy” and “human rights,” and resist unilateral coercive sanctions.
In the eyes of Xi, upholding and practicing genuine multilateralism is the only right way toward solving global challenges.
“The problems facing the world are intricate and complex. The way out of them is through upholding multilateralism and building a community with a shared future for mankind,” Xi said in late January when addressing the World Economic Forum Virtual Event of the Davos Agenda.
All countries should follow the principles of extensive consultation, joint contribution and shared benefits, uphold true multilateralism, and make the global governance system more fair and equitable, Xi said later at the Boao Forum.
This year marks the 50th anniversary of the restoration of the lawful seat of the People’s Republic of China in the UN, the 20th anniversary of China’s accession to the World Trade Organization, and the 20th anniversary of the Shanghai Cooperation Organization. MDT/Xinhua