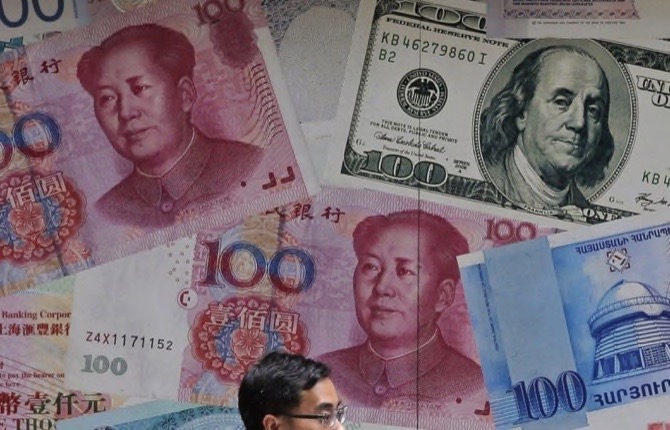 China allowed its currency to fall further yesterday and accused Washington of destroying the global economic order, fueling fears about increasing damage from their trade war.

The yuan declined to 7.0562 to the U.S. dollar before strengthening to 7.0297 in the afternoon. That came a day after Beijing sent financial markets tumbling by allowing the currency to fall to an 11-year low, breaking through the politically sensitive level of seven to the dollar.

The Trump administration responded Monday by officially declaring that China improperly manipulates the yuan’s value. That opens the way to possible new penalties on top of tariff hikes already imposed on Chinese goods in a fight over Beijing’s trade surplus and technology policies.

“One cannot understand how such a big, internationally influential country could be so irresponsible,” the People’s Daily said.

The Chinese central bank denied improperly manipulating the exchange rate. It said the yuan’s decline was driven by market forces.

The U.S. decision is “protectionist behavior” that will have “a major impact on global finance,” the People’s Bank of China said on its website.

President Donald Trump rattled investors with last week’s surprise announcement of punitive tariffs on an additional $300 billion of Chinese imports, effective Sept. 1. That came after a round of talks on resolving their tariff war ended in Shanghai with no indication of a deal.

“The latest U.S. move will likely harden China’s position in trade negotiations,” Tao Wang of UBS said in a report.

Washington’s latest moves may be “evidence that the U.S. administration may not really want to reach a trade deal soon,” said Wang. “We believe there is an increasing risk to a delay or cancellation of the planned trade talks.”

“Equities are slumping. They will slump more,” Rabobank’s Michael Every said in a report. “Worry about global trade flows, as a stronger USD rumbles through the real economy and U.S.-China divorce smashes supply chains.”

The Chinese central bank governor, Yi Gang, tried to reassure investors, promising in a statement late Monday to stick to commitments “not to use exchange rates for competitive purposes.”

The central bank is “committed to maintaining the basic stability” of the yuan “at a reasonable and balanced level,” Yi said.

The People’s Bank of China sets the exchange rate each morning and allows the yuan to fluctuate by 2% against the dollar during the day. The central bank can buy or sell currency — or order commercial banks to do so — to dampen price movements.

Yesterday, the yuan’s starting exchange rate was set at 6.9683. That would allow the currency to weaken to as much as 7.100 while staying within the 2% trading band.

The dollar’s unexpected strength against the yuan could have global repercussions, according to Nick Wall of Merian Global Investors. He said many foreign borrowers need to repay debts in dollars that might become harder to obtain.

“The risks of a further dollar squeeze and more foreign exchange volatility are now quite high,” Wall said in a report.

Chinese leaders have promised to avoid “competitive devaluation” to boost exports by making them less expensive abroad. But regulators are trying to make the state-controlled exchange rate more responsive to market forces, which are pushing the yuan lower. Joe McDonald, Beijing, AP