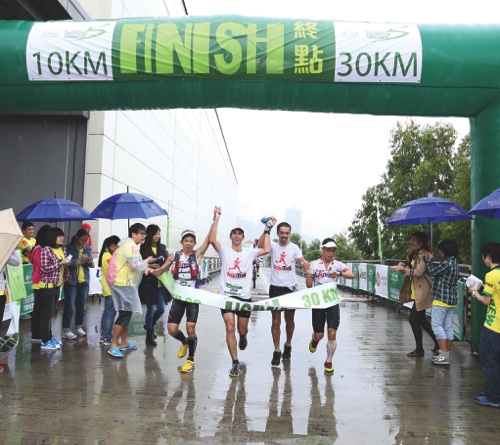 The constant light rain on Saturday morning didn’t stop over 1,800 runners, joggers and hikers turning out for the annual Sands China Macau Eco Trail Hiker event. A record of 450 teams saw a yearly increase in both local and overseas participants, raising MOP350,000 in charity funds from their entry fees this year.
“Today, the enthusiasm from the teams is amazing, even though the weather is not ideal,” said the Trailhiker director Robert Kirby. “Macau is known as a sporting center; a lot of people here care about their wellness, they are not going to let the rain stop them.”
A veteran team called “OiVa Running” was the first to cross the finish line, becoming the winner of the 10km Fun and Family Course with a time of 46 minutes and 7 seconds. A few minutes later, the 30km Corporate Challenge Course winner “Team Asia Trail” returned to the starting point after crossing the hiking trails in Coloane Hill in an impressive 2 hours and 33 minutes.
“Team Asia Trail” captain Pedro Ribeiro told the Times that this is his third TrailHiker event, and that he’s seen “more and more construction and pollution” along the course.
“Amazingly there are still a lot of people in Macau who haven’t been in the trails; for someone like that, it’s still quite good. For someone like me who’s seen the trails from the old times and from today, definitely the trails are not as good as they used to be,” he said.
The veteran hiker recognized that the trails used to be narrow, single tracks, but have since been widened by the government. Meanwhile, the natural, rough topography has given way to smooth pavements.
“It’s becoming almost like an urban path, the characters of the trails have been lost over the years,” he stressed. “The trails used to be very natural with a lot of roots and rocks. When they brought the bulldozers there, they just smoothed everything. You can almost go there in high heels. That’s the comparison of today’s trails and the trails of ten years ago.”
Mr Kirby also acknowledged the changing environment surrounding the trails; nevertheless, the organizersare keen to promote this greener side of the city and participants are happy with the sport event.
“Macau is a work in progress. (…) In a few years when Macau is settled down and most of the constructions are finished, we can have a much better event,” he continued, adding that the Trailhiker entries continued to grow despite the undergoing construction.
The event is in its fifth edition this year, with the concept of “eco” first emphasized in its title. Mr Kirby stated that this declaration meant the event would focus more on being eco-friendly. Several eco-friendly initiatives were also launched, such as a movement to promote the use of recyclable materials, as well as second-hand footwear donations. “In future years, we’ll do many more things,” he added.
Besides further promoting environmental awareness, the director said more charity causes are expected to benefit from the event’s donation. This year, the Association of Rehabilitation of Drug Abusers of Macau (ARTM) and Clean the World – an organization recycling used soap to curb hygiene-related illnesses in developing countries –
were chosen as beneficiaries.
For the event’s 5th anniversary milestone, teams that have participated since the first Macau TrailHiker were presented with a special “Loyalty Award.” The organizer also commended the first all-female teams to finish the 30km and 10km routes respectively, namely the “Wind-catching Roses” and “Macau Trail Runners Team W.”
Macau Daily Times is the media partner for the event. Brook Yang