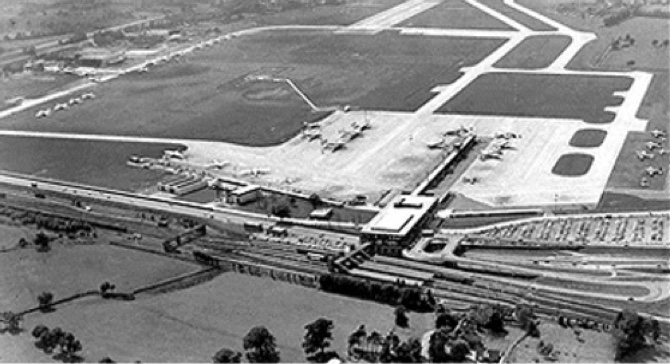 The British Government has given the green light to plans to convert Stansted into London’s third airport.

President of the Board of Trade Douglas Jay told the House Of Commons that the small airfield in Essex would become the site for a £47m international airport by 1974.

Announcing the decision following the conclusions of a White Paper, Mr Jay said the verdict had been reached “after very careful consideration”.

There had been considerable support for an alternative site on the Isle of Sheppey in Kent but Stansted was eventually selected by an inter-departmental committee.

The cost of developing Stansted, where there was already an airport with a 10,000ft runway, would be far cheaper than building a new airfield from scratch.

But Mr Jay said that the government had carried out a thorough re-examination and was satisfied that Stansted, though by no means ideal, was the best area for the airport.

Under proposals in the White Paper, the current airfield will be extended from 800 acres to 2,500 acres and once operational will include two parallel runways for supersonic and jumbo jets.

On top of the £41m development, another £6m will be allocated for road and rail access.

When the new travel facilities are completed it will take 70 minutes by road using the M11 and 45 minutes by rail to reach the airport from central London.

The development will also create jobs for over 20,000 people.

But 20 schools and a hospital will have to close and around 7,000 houses will be exposed to high levels of noise.

Peter Kirk, MP for Saffron Walden, objected to the development and said the decision would be received with “deep resentment and bitterness in his constituency”.

But Mr Jay said: “We realise there will be regret in the neighbourhood but this is inescapable wherever the airport is placed.

“No matter where the airport is sited, there will be a disturbance to some people who live and work in the area.”

Farmers also objected to the development on the grounds that it would lead to the loss of good agricultural land. […]

The decision to build Britain’s third airport at Stansted came against a background of 10 years of discussion.

More than 3,000 people from towns and villages in north Essex and east Hertfordshire took part in a rally in the weeks following the announcement.

The airport’s first terminal building opened in 1969 and was expanded a year later to handle a growing number of holidaymakers.

In 1979 it was, once again, designated as London’s third airport.

In 1984, the government approved a plan to develop Stansted in two phases, involving both airfield and terminal improvements that would increase the airport’s capacity to 15 million passengers per year.

Construction of the current terminal building began in 1986 and was completed in 1991.