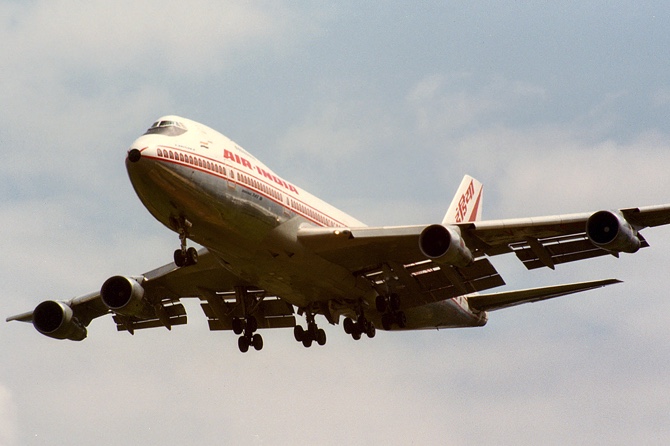 A passenger jet has disintegrated in mid-air off the coast of Ireland, killing all 329 people on board.

The Air India flight was only 45 minutes from London Heathrow when it suddenly disappeared from radar screens at 0816 BST.

Airline officials said they do not know the cause of the crash, but suspected it was caused by a bomb planted by Sikh extremists.

The Boeing 747 plunged into the sea from 30,000 ft (9,144 m) and rescue officials said they did not expect to find survivors. The pilot had no time to issue a mayday message, according to the coastguard.

Flight AI 182 was flying from Toronto to London with a stopover at Montreal. Most of the passengers were of Indian origin and intending to fly on to Bombay or Delhi.

The rescue operation is being co-ordinated by the coastguard in Plymouth and Falmouth, and four RAF helicopters are being used to search for bodies.

“There is a large slick of fuel about 4.5 miles [7.2km] long and a lot of wreckage on the surface,” pilot Paul Redfern said.

He confirmed some bodies had been recovered and taken to a temporary mortuary at Cork Airport.

A coastguard spokesman told the BBC he thought it very unlikely there would be any survivors.

“I think we have to face the facts. The chances can’t be very good – nevertheless if there is a possibility then we will explore it as far as we can,” he said.

Reyat was fined on a minor explosive charge, but the case against Mr Parmar was dropped – though Canadian police believed him to be the leader of the Air India conspiracy. He was killed by police in India in 1992.

In 1991, Reyat was sentenced to 10 years in prison for making a bomb destined for another Air India flight, but which exploded at Tokyo’s Narita airport, killing two baggage handlers.

Two years after his release, the Sikh electrician pleaded guilty to manslaughter in connection with the Air India bombing and was sentenced to five years.