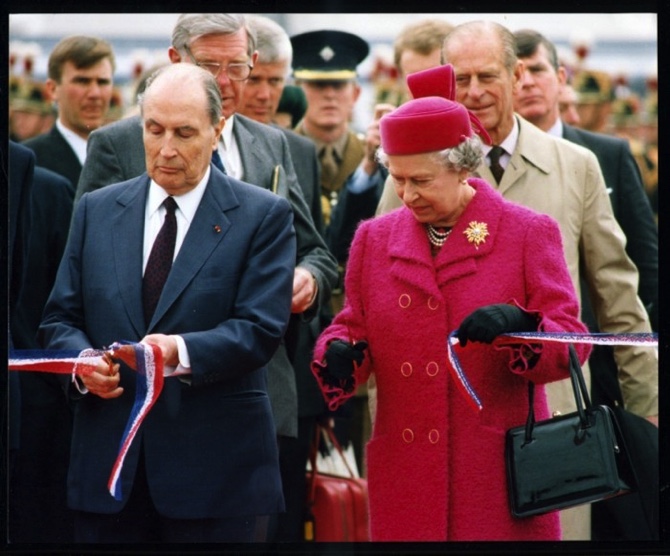 The Queen and France’s President Francois Mitterrand have formally opened the Channel Tunnel during two elaborate ceremonies in France and Britain.

After travelling through the tunnel, which took eight years and billions of pounds to build, the Queen said it was one of the world’s great technological achievements.

The tunnel is the first land link between Britain and Europe since the last Ice Age about 8,000 years ago.

The first leg of the Queen’s journey took her from London’s Waterloo station through the tunnel by high-speed Eurostar passenger train.

She arrived at Calais at the same time as the President Mitterrand’s train which had travelled from Paris’ Gard du Nord via Lille.

The two locomotives met nose to nose – a computer that prevents two trains travelling on the same track was switched off for the occasion.

The two heads of state cut red, white and blue ribbons simultaneously to the sound of their respective national anthems played by the band of the French Republican Guard.

They were accompanied by their Prime Ministers John Major and Edouard Balladur and other government ministers to the Eurotunnel terminus.

Eurostar will not start carrying passengers until July at the earliest and private cars will have to wait until October.

After lunch, the Queen and President Mitterrand took the royal Rolls-Royce on Le Shuttle for the 35-minute trip to Folkestone.

There was a similar ribbon-cutting ceremony on English soil. Among those present were joint Eurotunnel chairmen Sir Alastair Morton and André Bénard as well as Frenchman Philippe Cozette, who drilled the hole that first joined the two ends of the tunnel in December 1990.

Behind today’s celebrations lies the reality that the tunnel has run up huge debts. It cost £10bn to build, more than double the original forecast in 1987 – and there are serious doubts about its long-term financial viability.

At first the Channel Tunnel looked like it was going to be a financial disaster. A year after the official opening, the tunnel operator Eurotunnel announced a loss of £925m, one of the biggest in UK corporate history at the time.

To add to its woes, freight traffic was suspended for six months in 1996 after a fire broke out on a lorry in the tunnel.

A scheme in which banks agreed to swap billions of pounds worth of loans for shares saved the tunnel from going under and in 1999, Eurotunnel was able to announce its first net profit – £64m.

It still has huge debts – to the tune of £6.4bn in 2004. But it has become an accepted and popular mode of transport, not least among illegal immigrants trying to get into Britain from Europe.