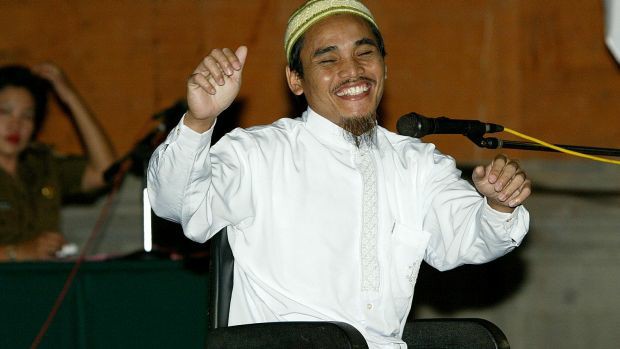 A court in Indonesia has convicted and sentenced to death a 41-year-old mechanic for his part in the bombing of two nightclubs in the island resort of Bali last year.
At least 190 people from 21 countries died in the blasts. Most were foreign tourists, nearly half of them from Australia.
Amrozi bin Nurhasyim is the first to stand trial for the bombs, which ripped through the crowded nightclub area in the island’s Kuta district.
He was found guilty of conspiring, planning and carrying out an act of terrorism.
He grinned broadly as the judge read out the guilty verdict, and then punched the air and turned around to give the thumbs-up sign to the courtroom as he was handed his death sentence.
But the judge’s final words were almost drowned out by cheers and applause from relatives and survivors of the bombings who packed the public gallery.
Five judges heard from more than 40 witnesses during his three-month trial, including survivors.
Throughout, Amrozi has appeared in court smiling defiantly and chanting furious slogans at the courtroom.
He has been known as the “smiling bomber” by the Australian press since he appeared laughing before television crews following his arrest last year.
He was charged after admitting buying the explosives and the minivan used in the bombings. Two of his brothers were also arrested, and are awaiting trial along with two others.
Survivors and relatives of the victims have welcomed the verdict, although some believe Amrozi should not have been handed a death sentence.
“Becoming a martyr is what he wants,” said Susannah Miller, who lost her brother Dan in the attack.
“It will add fuel to the fire of fundamentalism.”
Arguing for life imprisonment instead, she said, “It is very much a life sentence of grief for the relatives.”
Amrozi has said he is not worried by the death penalty.
“I’ll be happy to die a martyr,” he said. “After me there will be a million more Amrozis.”
Police yesterday said the militant Muslim group believed to be behind the Bali bombings, Jemaah Islamiah, was also behind the suicide car bomb attack two days ago on the Marriott Hotel in Jakarta, in which at least 10 people died.
The group is believed to have links with Osama bin Laden’s al-Quaeda network.

Amrozi was the first of three people to be sentenced to death for the Bali attacks. One of the others was his brother, Mukhlas, believed to be the mastermind behind the plot.
The third brother, Ali Imron, expressed remorse for what he had done and was sentenced to life imprisonment.
A fifth key suspect, Idris, was convicted in August 2004 of the Jakarta attack, but cleared of taking part in the Bali bombings – despite having admitted it – due to a legal technicality.
More than a dozen others were given lengthy jail sentences for their part in the plot.
Two suspects – university lecturer Dr Azahari Husin and electronics expert Dulmatin – have so far escaped capture by police.
Both are believed to be bomb-making experts. Husin is also a key suspect for the Jakarta hotel bombing.
Amrozi’s appeal against his death sentence was thrown out by the Supreme Court in January 2004. His lawyers say they will now file a judicial review.