27 years on | Moms of Tiananmen victims vow to fight 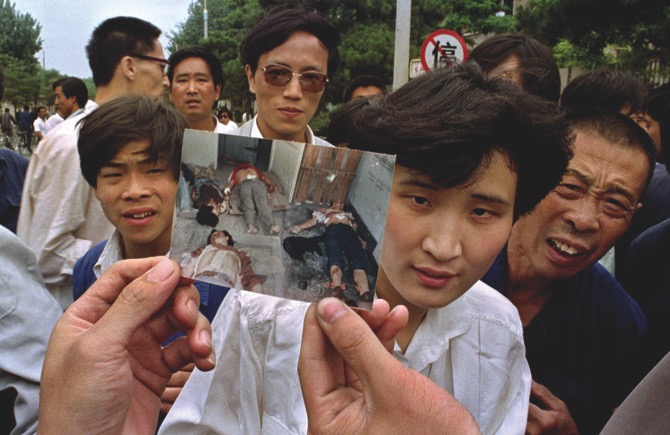 In this file photo take June 5, 1989, people on Chang’an Boulevard hold up a photo that they described as dead victims of the violence against pro-democracy protesters on Tiananmen Square, Beijing

Mothers of some of those killed in the bloody crackdown on China’s 1989 Tiananmen pro-democracy movement say they have lived through 27 years of state-led “terror and suffocation” and vow to continue pushing for the truth ahead of this weekend’s anniversary of the events.
An open letter signed by 131 mothers and published by the overseas advocacy group Human Rights in China said the victims’ families have endured constant harassment and intimidation by Chinese security services for pursuing justice for their loved ones.
“For us, family members of the victims’ families, it has been 27 years of (state) terror and suffocation,” the letter said.
“For 27 years, the police have been the ones who have dealt with us,” it said, listing a string of measures including electronic snooping and surveillance of family members, fabricated accusations and intimidation.
“All these actions undoubtedly desecrate the souls of those who perished in (the crackdown) and insult the honor of the living,” the letter said.
The letter condemns the Chinese government for apathy, accusing it of ignoring pleas by family members and wiping out public memory of the pro-democracy movement and the bloody crackdown on the night of June 3-4, 1989, in which hundreds, possibly thousands, were killed.
The government insists it was necessary to send in troops and tanks to quell what it has labeled a violent uprising against Communist Party rule, and has rejected all calls for an investigation or even discussion of the events. Most of the student leaders who fled abroad after the crackdown are still forbidden from returning home.
Yet, the women, who — along with their families and supporters — have become known collectively over the years as the Tiananmen Mothers, said they were convinced their campaign will eventually produce a full and objective reckoning of the events.
The letter was partially prompted by tightening security following the death of Jiang Peikun, husband of Ding Zilin, one of the most prominent Tiananmen mothers, said Yin Min, a fellow Tiananmen mother and signee of the letter.
Fellow mothers have been forbidden to visit Ding since April 22, Yin said.
Ding, whose 17-year-old son Jiang Jielian died in the crackdown, declined to be interviewed when reached by phone yesterday. As the face of the group, she has been subject to the most severe restrictions.
“It feels that there’s no end in sight. We are all at ages where death can happen any day, and we’d like to see the truth revealed and justice upheld while we are still alive,” said Yin, whose 19-year-­old son, Ye Weihang, was killed in the crackdown.
“We believe we have the obligation and the right to tell the public how we have lived those 27 years and to urge the government to take action,” Yin said by phone.
Another Tiananmen mother, Zhang Xianling, said she remains optimistic.
“Isn’t there a report that someone has lived to 105? I think I will live to the day when justice comes,” said Zhang, who lost her 19-year-old son Wang Nan in the crackdown.
Each year’s anniversary brings a tightening of restrictive measures, with family members confined to their homes or forced to leave Beijing. Ignored by China’s entirely state-controlled media, they are forbidden from publicly commemorating the deaths of their loved ones.
Even private events linked to the crackdown are banned, and overseas rights groups have reported that police hauled away at least three pro-democracy activists who attended a commemorative dinner in a Beijing home ahead of the anniversary. Two other men have also been detained for making or promoting bottles of Chinese liquor with labels that referenced June 4, a Hong Kong newspaper reported.
Despite such threats, the letter expressed faith that justice will eventually come.
“We use our immense maternal love to declare publicly to future generations: Do not succumb to brute force, confront all evil forces with courage, and justice will prevail,” the letter read. Didi Tang, Beijing, AP