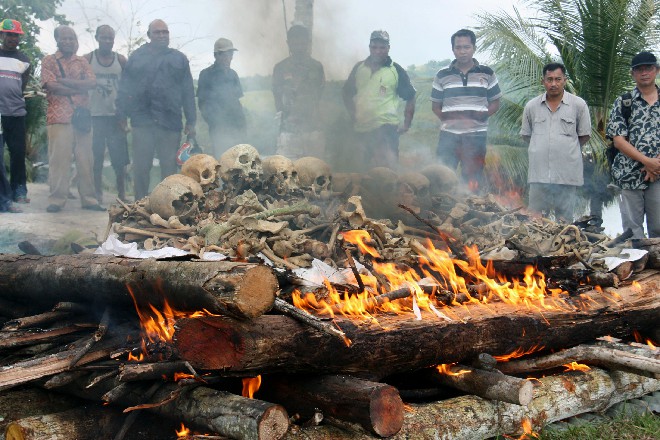 Seventy-five years after the end of World War II, more than 1 million Japanese war dead are scattered throughout Asia, where the legacy of Japanese aggression still hampers recovery efforts.
The missing Japanese make up about half of the 2.4 million soldiers who died overseas during Japan’s military rampage across Asia in the early 20th century.
They are on remote islands in the South Pacific. They are in northern China and Mongolia. They are in Russia.
As the anniversary for the end of the Pacific War arrives Saturday, there is little hope these remains will ever be recovered, let alone identified and returned to grieving family members.
Only about half a million are considered retrievable. The rest are lost in the sea or buried in areas that can’t be reached because of fighting or security or political reasons, according to Japan’s Ministry of Health, Labor and Welfare, which is in charge of support measures for bereaved families.
Locating, identifying and finding places to store the decades-old remains have been complicated as memories fade, artifacts and documents get lost and families and relatives age.
In 2016, Japan’s parliament passed a law launching an eight-year remains recovery initiative through 2024. It promotes more DNA matching and cooperation with the U.S. Department of Defense in case remains are found at U.S. military facilities on islands in the southern Pacific that were former battlegrounds.
It was not until 2003 that the Japanese government started DNA matching, but only at the request of possible families. In July, Japan set up a comprehensive remains information center at the ministry that would provide DNA testing.
After Japan’s disastrous retreats in the Pacific in 1943, the military started sending back empty boxes with stones to bereaved families, without providing details about the deaths. Japan insisted all war dead would be honored as gods at Yasukuni Shrine.
Similar practices were continued by postwar governments, which didn’t put an emphasis on identifying individual remains to return to families, experts say.
Japan sent its first overseas remains collection mission in 1952 after a seven-year U.S. occupation ended. The efforts were unwelcome in many Asian countries that had suffered under Japanese wartime aggression.
The government in the 1950s dispatched missions to major former battlegrounds for the “token” collection of random remains; most were unidentified and never returned to families. After collecting the remains of about 10,000 war dead, the welfare ministry in 1962 tried to end the project but was forced to continue the effort following repeated requests by veterans and bereaved families.
The government mission has so far recovered just 340,000 remains; most are kept at Tokyo’s Chidorigafuchi national cemetery of unknown soldiers.
They were never DNA tested or identified, and almost certainly include a “significant number” of the remains of non-Japanese nationals, including Koreans and Taiwanese soldiers drafted and sent overseas to fight for the Japanese Imperial Army, said Kazufumi Hamai, a Teikyo University historian and expert on the remains issue.
More than 240,000 Koreans fought for Japan during the country’s 1910-1945 colonial rule of the Korean Peninsula, including 20,000 believed to have died outside of mainland Japan. Some of their remains were most likely brought back, unidentified and mixed with the Japanese collected during past missions before being placed in Chidorigafuchi.
Japan’s delayed and insufficient remains collection underscored the government’s failure to face up to its wartime past, Hamai said.
“The government lacked respect for individual remains and their dignity,” he said. “Their remains collection program was sloppy and carried out reluctantly at the request of veterans’ families, while completely neglecting the Koreans and Taiwanese.”
About 700 remains of Koreans have been separately stored at a Tokyo Buddhist temple, Yutenji. Health and welfare ministry officials say they are the only remains of the former Korean soldiers that they are aware of. More than half of the 700 are from North Korea.
Several hundred remains had been previously returned to their homes through diplomatic arrangement, but talks have been stalled in recent years as diplomatic relations have soured over Japan’s wartime actions, including the use of forced laborers and the sexual abuses of women forced to work at frontline military brothels.
Japan gained access to Russia and Mongolia only starting in 1991, when Japan was given a list of tens of thousands of imprisoned Japanese soldiers and maps of the mass graves where they were buried. About 600,000 were sent to former Soviet prisons, where 55,000 died, including a few thousand Koreans.
Last year, a U.S. citizens’ group searching for the remains of American war dead in the Pacific War found the remains of about 160 Asians on the island of Tarawa — called the Republic of Kiribati today. It asked the Japanese and Korean governments to have them DNA tested.
Hamai says the case could set the stage for Japan and South Korea cooperating to identify and return the remains to where they belong. MARI YAMAGUCHI, TOKYO, AP