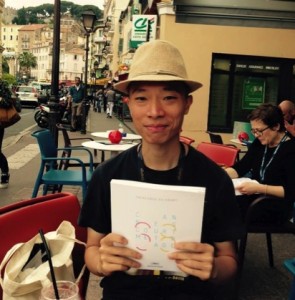 Local translator and interpreter Cheong Kin Man’s award-winning film, “A Useless Fiction” has earned him the rare opportunity to present his work at the 2015 Cannes Film Festival.
The movie made its debut at the world-renowned film competition’s Short Film Corner, which is an event where talented filmmakers come together to share mutual insights into each other’s works. The filmmaker, who received the presentation confirmation from the festival authorities on his birthday, was appreciative of how much the 13-day experience has given him.
“I am very happy, not only because of the dynamic of the Palais des Festivals of which likeness I have never seen, but also because Cannes is a very beautiful city, a magnificent one. And it is incredible that we are at the same place as the celebrities and use the same ‘entrée des artistes’, but of course we do not have red carpets and I do not even have a tuxedo. No doubt it is a very special moment for me and a great privilege,” said Cheong adding that he met many “filmmaking rookies like him” during the first six days of the festival.
Currently residing in Belgium, Cheong will soon fly to the southwestern Slovenian city of Izola for another screening at the 11th edition of Isola Cinema. As he quipped, the name of his short film will now comprise of a Slovene word, with words in Portuguese, Chinese or ancient Vietnamese and English all featured in the entire name.
In April, the experimental film won the “2015 Rising Star Award” at the Canada International Film Festival. Staff reporter

Anabela Ritchie, who served the former president of the Legislative Assembly when the city was still under Portuguese administration, praised Cheong Kin Man’s film, saying that “it is an extraordinary achievement, as it is the first Macau film, and the only one, to represent Macau at the prestigious Cannes Film Festival.”