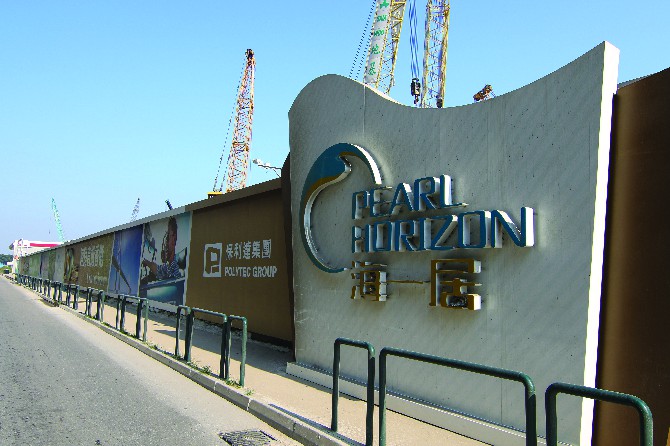 The Administrative Court has ruled against Polytex Import and Export Company Limited, which filed a compensation claim of 25.4 billion patacas against the government over losses related to the reclaiming of land plot concessions whose contracts had expired, the Office of the President of the Final Appeal Court has informed.
The case relates to the land plots of the former development site known as Pearl Horizon, which the government reclaimed pleading the concession’s expiration.
In November 2018, the company filed a compensation claim for around 25.4 billion patacas which included damages in lost profits, emerging damages and losses related to potential business opportunities, in addition to a claim for non-pecuniary losses in the symbolic amount of 1 pataca.
In its claim, Polytex said that the government’s actions had prevented the company from completing the construction of the building according to the concession within the given time and that the government should either pay the damages claimed or grant the company a new concession for the same land plot so it could complete the work.
On the government’s side, authorities questioned the legality of the process and argued that it was unable to provide a new concession or extend the expired one. The government also noted that the period for claiming damages had expired and that the company had waived its right to claim damages, adding that the reasons that Polytex is invoking are incompatible with the case filed.
The court accepted the government’s submissions and considered that the waiver declaration previously made by Polytex was valid and precluded it from filing a subsequent claim for damages. The court refused to make the orders sought by Polytex.
The court also noted that such a waiver, although suggested by the government, was made consciously and unilaterally by the company. The ruling also adds that the waiver was not made out of fear or self-inflicted damage, but as part of a deliberate business strategy designed to obtain special benefits from the other party.
Lastly, in relation to the claim for moral damages as compensation for non- pecuniary loss, the judge noted that the party in this case is not a person but a commercial company, and that the company also failed to demonstrate how its reputation was tarnished by the administrative action from the government and the damage it sustained as a result.
The court also noted that even the amount claimed of just 1 pataca shows that the request is merely symbolic and there is no serious matter to be invoked that is worthy of legal protection.
It is not clear for the time being whether Polytex intends to file an appeal from the decision of the Administrative Court.

The government has reclaimed two land plots located in the Nam Van area in between the Lakes Nam Vai and Sai Van, whose concessions were declared expired, the Land, Public Works and Transport Bureau (DSSOPT) informed.
The two contiguous land plots have a total area of 6,702 square meters and are classified as plots C10 and C11 of the Nam Van area. According to the DSSOPT, the former concessionaires had been previously notified to vacate the plots voluntarily within a given time. Since the plots were not vacated at the deadline, the DSSOPT proceeded earlier this week with the eviction to recover possession of the plots, clearing materials and equipment and fencing to prevent future unauthorized occupation. RM