A petition was recently submitted to the Portuguese parliament requesting that the mortal remains of the poet Camilo Pessanha, who died and is buried in Macau, be transferred to the National Pantheon of Portugal.
The petition, which is now being reviewed by the Portuguese Parliament Committee on Culture, Communication, Youth and Sports, is championed by legislator Edite Estrela, a former member of the European Parliament.
The plan to exhume the body of the reputed poet has not yet reached a consensus, particularly in Macau. Some argue that the poet’s tomb in Macau “is a landmark of the Portuguese presence and memory.” Some feel that “the grave is something tangible,” and believe that it is not absolutely essential to transfer it to the 17th-century monument in Lisbon. A burial in the Pantheon is considered to be the highest posthumous tribute, reserved only for the most respected Portuguese citizens.
Ana Jorge, great-granddaughter of Camilo Pessanha, told Lusa news agency that she disagrees with the possibility of the mortal remains being moved elsewhere, highlighting the fact that the poet shares his grave with his son and wife, who were of Chinese ethnicity.
Pessanha’s descendant told Lusa that in Macau, there exists a “different mentality” regarding ancestors. “We do not touch these things,” she said, recalling that the grave has already been in place for over 90 years, and that the family sees no reason to move it.
In Portugal, lawmaker Gabriela Canavilhas opined that the Portuguese government’s investment in “increasing its visibility, keeping the tomb visible and in good condition, and improving knowledge about the poet in Macau,” would be a more “useful” measure to take.
Contacted by the Times, architect Carlos Marreiros, a longtime fan and follower of Pessanha’s work, said that the news of the discussion in Portugal is bringing him “double joy.”
“Firstly, by the fact that the value of the person and his work is being considered for such a high recognition, and above all because people in the [Portuguese] republic still remember the diaspora poet,” he said, stating it “is something that has only been happening for the last 20 years.” 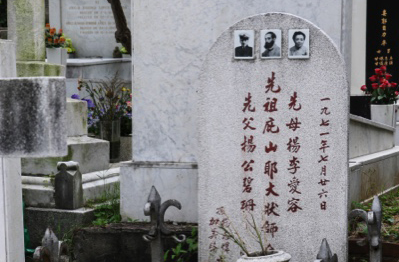 Marreiros, the author of the poet’s statue near Lisboa Hotel, considers Pessanha to be a deserving figure for the National Pantheon of Portugal, together with figures like the footballer Eusébio and the singer Amália. He does, however, also argue that “staying in Macau might be a good thing” as long as the current location is made more “dignified.”
“After all, it was here that he lived almost all his life and produced all his work,” Marreiros said. He believes “the Portuguese authorities should join the local institutions and admirers of the poet’s work in order to dignify the grave, and eventually find another place inside the same graveyard for a small but distinctive monument, which should include some biographical information and excerpts from his most highlighted works.” This proposal, according to the architect and artist, would “bring up the value of the poet,” contributing positively to a deeper study of his works and the production of higher quality Chinese-language publications.
Alexandra Domingues, a teacher at the Portuguese School, told the Times that she is divided about the topic of Pessanha’s grave. On the one hand, it would be a “great homage” to see the poet in the National Pantheon of Portugal.
“Camilo is from Macau and he belongs in Macau,” she said, highlighting the fact that it was here that he lived and where his work first gained renown. “Macau is his home.”
Regarding what possible measures to preserve his memory and work, Domingues said that “the preservation passes through the schools and its students,” adding that “reintegrating the study of Pessanha’s work into the school curriculum would definitely be a first step.” She considers Pessanha to be a “universal poet” and the first to “open the door between Macau and modern Europe.”
Journalist Carlos Morais José has been studying the poet’s works and feels strongly that his body should stay in Macau. “He is a Portuguese poet from Macau,” he said, adding, “It is more important to Portugal that one of its great poets lived in Macau, has roots and family in Macau, than to remove his bones.”
In addition, Morais José finds a few other factors relevant to the discussion. “[The transfer of the mortal remains] is an expensive process and involves many things, such as his family’s beliefs and traditions. There is much more to do than just to move his bones. Touch his work, for example.”
The Hoje Macau newspaper director added, “This year completes 90 years from his death and we have barely done anything to celebrate the poet, besides a conference during the Macau Literary Festival.”
In his opinion, in order to keep Pessanha’s memory alive, his work must be released to the public, either in schools or in a dedicated museum, which “should have been already done.”

who is camilo pessanha?

Camilo Pessanha was born on September 7, 1867 in Coimbra, Portugal and died on March 1, 1926, in Macau. Remembered as one of the world’s greatest symbolist poets, he arrived in Macau on April 10, 1894 to become a philosophy teacher in the newly established Gymnasium of Macau. Pessanha’s masterpiece “Clepsydra” (1920) is the product of his habit of giving away his poems to friends, resulting in many of them being either lost or destroyed – combined with his talent for rewriting most of his works from memory. “Clepsydra”  was prompted by an idea from Ana de Castro Osório to compile all of Pessanha’s works into a single volume, to which he agreed.