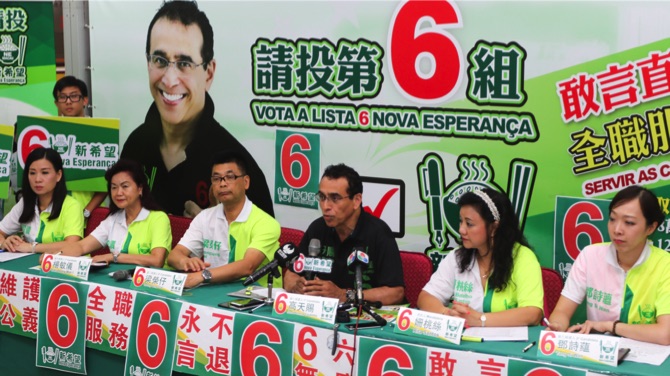 The New Hope (Nova Esperança) candidacy to the Legislative Assembly (AL) elections, headed by lawmaker José Pereira Coutinho, urged the government to distribute a second share of the Wealth Partaking Scheme within this year.

Coutinho was speaking at a press conference organized by the list so that candidates can present their political programs, at the headquarters of the Macau Civil Servants Association (ATFPM). He noted that more than just words are needed to solve people’s problems.

“It is not enough for the Chief Executive [CE] to come and address an open letter to the civil servants and to the citizens. It is not enough to come every year to say that the civil servants are the most valuable elements [in the government’s workforce]. It’s needed to give concrete things and that is why we ask the CE […] to concede another compensation, under the Wealth Partaking Scheme, [in the amount] of MOP9,000 to all Macau citizens including the civil servants,” Coutinho said. “This Wealth Partaking Scheme share should be raised to [MOP] 12,000 next year,” he proposed as one of the measures that comprise the list’s political program for the upcoming legislature.

Among other highlighted demands, New Hope requests the construction of 80,000 affordable housing units “in order to solve the housing problems of citizens.” According to Coutinho, these houses are not being properly constructed, in line with concerns from civil servants that there are “absolutely no house[s] being built or given to them,” in the past legislature.

Another of the government subsidies that New Hope proposes to fight for at the AL elections is in relation to the healthcare voucher scheme. Coutinho proposed raising it from the current MOP600 to MOP1,000, an amount that he argues should be further increased to MOP3,000 in the cases of senior citizens (65+).

Besides housing and government subsidies, labor issues was another highlighted topic during the press conference. Coutinho mentioned several measures in New Hope’s political program, starting from maternity leave, which he proposes to be raised from the current 56 to 90 days, in order to have a uniform system between the public and private sector.

Another of the policies proposed by Coutinho and Leong Veng Chai regarding labor is the extinction of the legal clause “termination without just cause,” as well as continuing to fight for a trade union law and “the right of workers to organize themselves and to negotiate [with the employers] in a collective way.”

Addressing the civil servants’ problems, New Hope proposes to end the limit of 300 hours per year of paid overtime to drivers and other government employees, while promoting the merging of the index categories of several civil servant careers (195 with 260, and 350 with 430), as well as the increase of risk subsidies, pensions and other life guarantees to the workers from the Security Forces.

As an example, Coutinho mentioned the recent case of a diver from the Customs Services (SA) who was allegedly frightened by the working conditions and poor guarantees during the rescue operations of Typhoon Hato.

According to Coutinho, the recent typhoon is proof that “while we don’t have great calamities or deaths, this government doesn’t move.”

Coutinho also mentioned that most of the measures proposed on his political program in campaigning for the AL are recurrent and even repeated from previous legislatures. He continued saying that the “AL can’t really take care of these topics,” and although they have been addressed many times by New Hope, they do not really appear on the agendas of other groups.

Candidate and list head for the New Hope list, José Pereira Coutinho, says he has been analyzing some other list’s materials and apparently some of them are confusing roles.

“I have realized that many lists have been presenting political platforms which restrict themselves to policies of ‘opposition party’,” he said, noting, “well, we are not running here [in this election] to the government, we are running for a lawmaker seat in the Legislative Assembly, and I believe that [some] people have no idea what it means to be a lawmaker.” Coutinho added, “to be a lawmaker is in  the first place to realize what the Basic Law allows us and obliges us.”

Coutinho reminded that the two main roles of a lawmaker are to propose bills and to inspect the government’s work.

The candidate also recalled there are significant differences between the Hong Kong SAR and Macau municipal bodies, noting that the neighboring region has “district council members” which address the specific problems of each district, a situation that does not happen in Macau and might be confused on some of the lists.