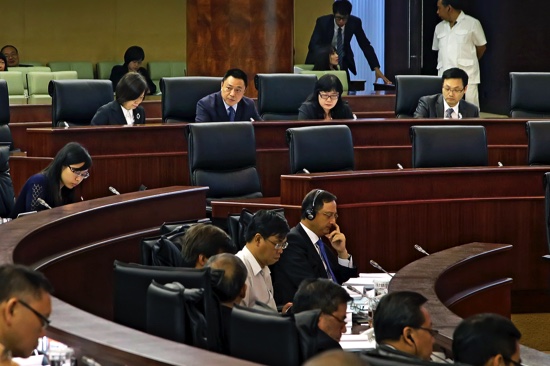 Bills to amend the External Trade Law and the Affordable Housing Law obtained their first approval by the Legislative Assembly (AL) yesterday, suggesting faster procedures for customs clearance of MICE merchandise and for affordable housing applications.
The plenary session held yesterday also passed the final reading of amendments to the current Commercial Code, which will abolish bearer shares. Moreover, the AL passed a revision on its Rules of Procedure and the amended public budget for 2015.
Introducing the draft bill amending the External Trade Law, the Secretary for Economy and Finance, Lionel Leong, told lawmakers that the changes are aimed at facilitating the city’s developing MICE (meetings, incentives, conferences and exhibitions) and logistics industries.
By introducing into Macau’s legal regime the internationally-accepted ATA carnet – a customs and temporary import-export document known as a “passport for goods,” the amendment will allow merchandise to be exempted from duty and import tax if it will be re-exported within 6 months.
Regarding a new option that allows goods to “clear customs before declaration,” some lawmakers were concerned that looser regulations may imply a hidden risk. According to Leong, the temporary goods into the city are currently mainly exhibits, whereby a convenient customs clearance will be conducive to the sector.
The bill also suggests implementing a licensing system on cargo transshipments, in order to effectively oversee the transit of sensitive and regulated goods. Under the current External Trade Law, regulated cargo is permitted to transit through Macau as long as it is declared. “The licensing is to regulate goods that will be controlled in the future, such as psychotropic substances,” added the Macao Economic Services deputy director, Chan Tze Wai.
Also to be speeded up through legal amendment is the application procedure for affordable housing units. As the bill proposes moving up the drawing process of selecting applicants, rather than first conducting a thorough review of all applicants’ qualifications, the Housing Bureau can save 15 months time processing some current 4,2000 applications to a batch of 1,900 apartments.
Lawmaker Au Kam San questioned that the revised procedure may leave a sizable amount of rejected applicants in the dark of not knowing whether they are qualified, given the previous figure that about thirty percent of applicants might be unqualified. Lawmaker Chui Sai Peng also added, “it is very important for the applicants to know whether they are qualified [for affordable housing], it affects their decisions on many things such as whether to get married.”
In response, the bureau head Ieong Kam Wa stressed that the current preliminary evaluation process has created a long queue that’s at a standstill and has thus put the bureau ’s work in difficulty. The Secretary for Transport and Public Works, Raimundo do Rosário, further reaffirmed to the lawmakers that “the partial amendment is merely to solve a problem of administrative procedure, and will followed by a thorough review of the Affordable Housing Law.”
Rosário’s secretariat was again under fire during the AL’s final reading of this year’s amended budget. Drawing on the bill’s foreseen budget balance cuts of 63.7 percent, from MOP51.86 billion to MOP18.85 billion, lawmakers urged the government to control its cost overruns in undergoing major public works.
The estimated budget revenue was also adjusted downwards by 22.4 percent from MOP154.66 billion to MOP 119.97 billion; whereas the estimated public expenditure slightly rose by 0.05 percent to MOP83.76 billion. The bill also raised the ceiling for tax exemption for companies by doubling the income standard to MOP600,000. Lionel Leong noted that the measure would benefit 90 percent of local small- and medium-sized enterprises.
During the meeting, 32 lawmakers in attendance also unanimously voted in favor of an amendment to the Commercial Code to abolish bearer shares. Once the bill takes effect, bearer shareholders will have a period of one year to convert their shares into registered ones. Otherwise, their shareholder’s rights will be terminated and they can only convert the shares through lawsuits, although their holding will not be abolished.
Moreover, the AL passed a revision on its Rules of Procedure. The new rules added that launching of a hearing process during debates must be premised on the AL’s competences stipulated in the Basic Law such as clarifying the public interest.