AL president: legal advisers were dismissed for their own benefit 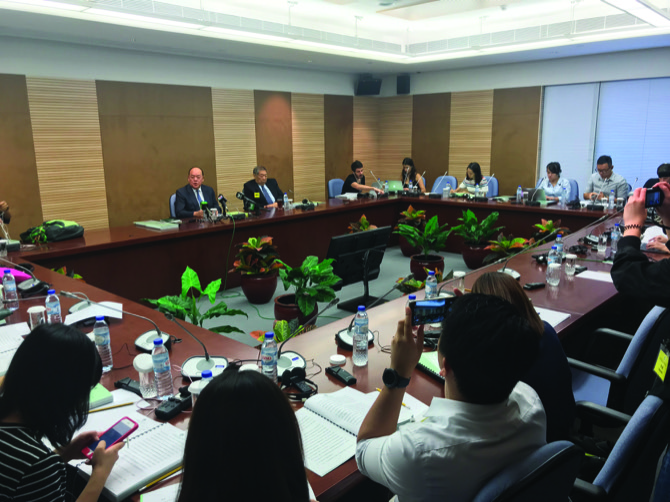 The President of the Legislative Assembly (AL), Ho Iat Seng, has said that the dismissal of two AL legal advisers, Paulo Cardinal and Paulo Taipa, was not due to political reasons, nor due to the advisers’ ethnicity, but instead to allow them to pursue other careers.

When questioned by the media about the termination of the contracts of both Paulo Cardinal and Paulo Taipa, Ho said “there is no political factor. We [the presidency of AL] highly rate them. […] This matter cannot be linked to politics.”

In Ho’s words, not renewing the work contracts of the two legal advisers is “a very normal change in human resources.”

According to the AL president, currently, the AL has 24 people working on legal matters. Nine of them are legal advisors; six are technical advisers; and nine are senior technicians.

On average, there is ratio of 0.8 legal professionals to every lawmaker.

As stated by the AL President, there will be 0.75 assisting legal experts per lawmaker once Cardinal and Taipa leave the AL.

Cardinal and Taipa will cease their duties at the AL by December 31. When the two legal advisers leave their positions, only four legal experts will remain contributing to the AL.

In response to several questions about the reasons behind the termination of the employees, Ho indicated that the two legal professionals will have better opportunities in Macau’s legal market rather than spending their efforts at the AL until their retirement.

“We talked sincerely with the two legal advisers. We [think] this is a simple thing. One person has to try different things. Does one person have to perform the same single job until retirement?” Ho replied, further asking, “Does one type of people have to [do one type of job] until they are old? I believe they [Cardinal and Taipa] will have … [career] development outside. […] We think that in Macau’s legal market, there is a shortage [of talented people].”

Ho also denied that the decision was because of their Portuguese ethnicity. “Is it because they are Portuguese? I think the media should not assume this,” declared Ho, adding, “We think they will have better opportunities [rather than working for the AL].”

Ho also stated that the AL will not exclude the possibility of hiring more legal advisers in the future, but he is not aware of any schedule to do so as yet. JZ

“The AL’s work can never gather the public’s full agreement, but we accept all kinds of criticism. As a lawmaker, when you [Sulu] said that the AL is a ‘trash AL’, you are also saying that you are [trash]. Why did you try so hard to enter a trash AL? If you think you are uppity, then don’t come to this trash AL,” said Ho.

Sou’s statement has been forwarded to AL’s House Rules Committee due to the protest made by Vong Hin Fai, who is a member of that particular committee.

Regarding whether Vong Hin Fai should avoid the discussion over Sou’s statement and Vong’s protest, due to his own stance, Ho Iat Seng said, “[I] can’t find an article in the Rules of Procedure” to suggest that Vong should not participate in the discussion.

THE VICE president of the Legislative Assembly (AL) and brother of the Chief Executive (CE), Chui Sai Cheong, said that he will support the candidacy of Ho Iat Seng for the position of CE. Cheong was speaking during the meeting held yesterday to evaluate the first year of this legislature when questioned by the media on the possibility. “I think the president [Ho] already meets all the conditions to be Chief Executive but that’s a decision that only he can take,” said Cheong. Asked the same question, Ho excused himself from commenting further on the matter, noting that for the time being he is a lawmaker and president of the AL. “Regarding this matter I need to state clearly that for the time being I’m still the president of the Legislative Assembly and I do not wish to create any confusion with this,” he said.