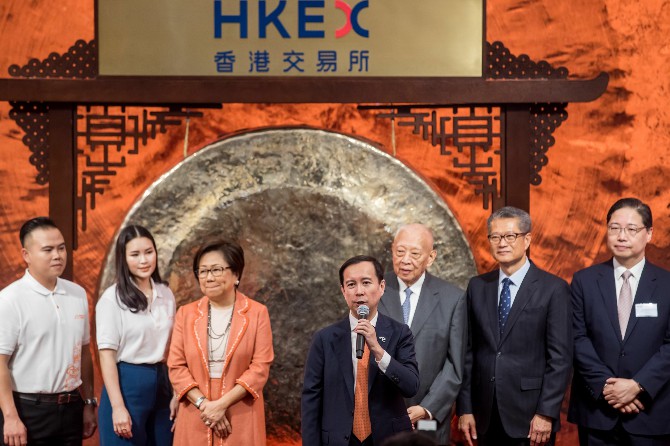 Investors betting on Alibaba Group Holding Ltd.’s inclusion in a program allowing mainland Chinese investors to buy its shares in Hong Kong could be in for a disappointment.
China’s largest e-commerce company, valued at HKD4.56 trillion ($587 billion) in Hong Kong, can’t be included in the stock connect program linking the Asian financial hub with Chinese investors at present, according to people with knowledge of the matter, who asked not to be identified as the discussions are private.
The exclusion of companies with secondary listings and weighted voting rights from the program was part of an arrangement agreed to by the mainland and Hong Kong exchanges before Alibaba’s Hong Kong debut last year, the people said. The Shanghai, Shenzhen and Hong Kong exchanges haven’t agreed to make an exception or revise the agreement for Alibaba, though that could change in the future, they said.
With the bourses competing to draw the listings of local firms already floated in the U.S., allowing companies in Alibaba’s position into the program would run contrary to Beijing’s ambitions of developing its mainland exchanges, particularly as unrest grips Hong Kong. Other Chinese firms – among the country’s largest corporations, from JD.com Inc. to Baidu Inc. – may then be encouraged to also pick Hong Kong, bypassing the Shanghai or Shenzhen bourses.
The Hong Kong Stock Exchanges & Clearing Ltd. has proposed changes to the China Securities Regulatory Commission, which hasn’t yet made a decision to revise the previous arrangement, one of the people said.
Companies with weighted voting rights and a secondary listing are not currently included in the stock connect and there’s been no precedent for such a move, a Hong Kong Exchange spokesman said in response to questions on the agreement. “We look forward to discussing the potential for this with relevant parties in the future,” he said. “More generally, HKEX is not in the habit of banning things that it considers positive for the market.”
Alibaba is not among the current batch of companies to be included in the stock connect, said a separate person, adding that the list will be updated on Feb. 17.
Representatives for Alibaba and the Shanghai Stock Exchange declined to comment. Shenzhen Stock Exchange and China’s stock market watchdog, the China Securities Regulatory Commission, didn’t immediately reply to emails seeking comment.
Alibaba’s landmark $13 billion secondary listing in Hong Kong last year was in part spurred by expectations that it would attract a vast pool of capital from its home country if included in the stock connect
In the Hong Kong offering, Alibaba preserved its governance structure: Granting a partnership of top executives the right to nominate a majority of board members. That system falls broadly into the definition of having weighted voting rights in Hong Kong.
Alibaba’s shares are up about 20% since the November listing, prompting other U.S.-listed technology companies including Trip.com to look at a secondary listing in Hong Kong, people familiar have said. Alibaba fell as much as 2.5% in Hong Kong Tuesday, the biggest drop in two weeks, before paring losses.
In the past, China has green-lit companies with weighted voting rights that conducted primary share sales in Hong Kong to join the stock connect program. For example, food delivery giant Meituan Dianping and smartphone maker Xiaomi Corp. joined in late October. Chinese firms with dual class shares started listing in July on Shanghai’s new tech-focused Star board. Bloomberg