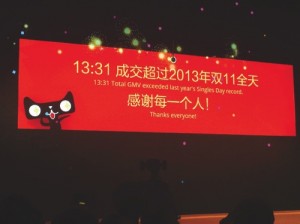 Alibaba Group Holding Ltd. turned an obscure Chinese holiday into the country’s biggest shopping event. Now it’s aiming to take the success of Singles’ Day global by tapping foreign brands, including Calvin Klein and Blue Nile Inc.
Those companies, along with Costco Wholesale Corp., Origins Natural Resources Inc. and American Eagle Outfitters Inc., were participating in yesterday’s event for the first time. Alibaba said it sold more than 36.2 billion yuan (USD5.9 billion) of merchandise within 14 hours of the promotion kicking off, eclipsing last year’s record.
Alibaba, which less than two months ago completed the biggest initial public offering ever, is using 27,000 labels to attract international merchants and consumers for a promotion with almost triple the sales of Cyber Monday. The company will offer steep discounts on Tmall and its other websites to entice shoppers, who may spend more than 50 billion yuan, according to an estimate by consultant OgilvyOne Shanghai.
“November 11 is a key milestone for Alibaba,” said Allen Xu, the consultant’s managing director. “The company used the festival to build its dominance as an e-commerce player linking businesses to consumers in China. With the IPO of Alibaba, the company has the ambition to make this brand go global.”
Merchandise sold was 36.2 billion yuan as of 1:31 p.m. Beijing time, Alibaba said in a post on its Twitter Inc. account. That is more than the $5.29 billion of U.S. online sales from Thanksgiving through Cyber Monday in 2013, the company said.
Singles’ Day, a Chinese twist on Valentine’s Day, was invented by students in the 1990s, according to the Communist Party-owned People’s Daily. When written numerically, the date is reminiscent of “bare branches,” the Chinese expression for bachelors and spinsters.
Alibaba’s Tmall began marketing Nov. 11 as its biggest sales event in 2009, rivals jumped on board, and the day turned from an opportunity to seek out a partner – or celebrate singledom – into an online shopping bonanza.
Merchants on Tmall are encouraged to offer pre-orders this year to ease Internet traffic on Singles’ Day and also guarantee their ability to buy goods, said Brian Lee, who oversees distribution in China of Elle handbags and purses.
Elle was expecting to sell 27,000 items yesterday, compared with an average of 200 items per day. About 20 percent of that can be pre-ordered if customers pay a 15 percent deposit.
Xiaomi Corp., China’s biggest smartphone vendor, sold 720,000 Mi phones worth 1 billion yuan in 12 hours, Vice President Hugo Barra said in a Twitter post yesterday.
Building Singles’ Day into an international event could be the next test for Alibaba’s momentum. Still, the company isn’t expecting a significant contribution from global sales this year, Chief Operating Officer Daniel Zhang said Monday at a press briefing in Hangzhou.
“We try to create a real global consumer day,” Zhang said. “The numbers could be quite small, because we are in the beginning stage.”
Outside of mainland China, Alibaba’s sales promotion has been most popular in Hong Kong, followed by the U.S and Taiwan, according to data released by the company yesterday. Shopping from mobile devices will be 45 percent to 50 percent this year, Steve Wang, Alibaba’s Tmall President, said at a press conference in Hangzhou yesterday.
Alibaba raised a record $25 billion in September’s IPO after it increased the amount of stock it was selling and the price of shares.
Since its Sept. 19 debut, the stock has surged 75 percent in New York, and the company has posted quarterly earnings that beat analysts’ estimates.
“Alibaba will continue to be the dominant player in China,” Xu said. Replicating that success overseas “would require all parts of the e-commerce engine to work in sync.”
Merchants offer discounts on Singles’ Day of at least 50 percent so they can participate and drive sales through Tmall as well as other Alibaba platforms, including AliExpress and Taobao Marketplace.
Others participating on Tmall for the first time include Kenneth Cole and Unilever Plc.
While Tmall connects brands with consumers inside China, AliExpress is the company’s platform focusing on international customers.
Alibaba’s push to become more international has been underpinned by deals, with the company announcing more than $16 billion worth of acquisitions since 2012, according to data compiled by Bloomberg.
Alibaba had about $18 billion of cash in hand as of September, and Vice Chairman Joe Tsai said it would continue investing in companies that help gain e-commerce users and bring long-term value. Bloomberg