Amanda Liu | Powerlifter and bodybuilder: From books to barbell | The story of a lawyer-weightlifter 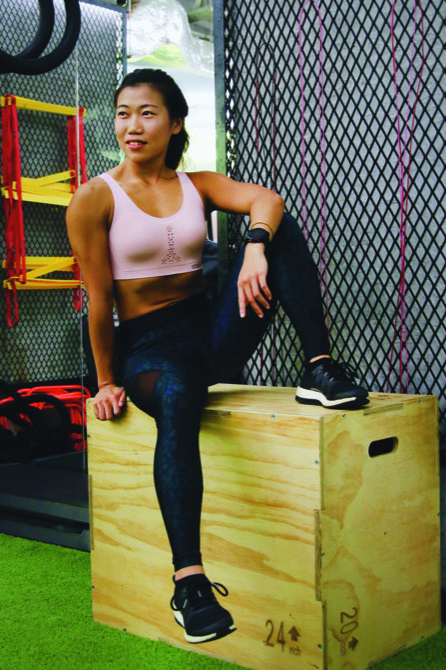 Born in mainland China, Amanda Liu came to live in Macau at the age of 10. At 18, she packed her bags and headed to Portugal to face one of the biggest challenges of her life, but, as she told us, one that changed her forever and made her who she is today.

Besides being a powerlifter and bodybuilder, Amanda Liu is also a legal counselor at a local law firm and hopes to be officially recognized as a lawyer soon.

Interviewed by the Times, Liu speaks about the significance of winning the female category of the 2018 Macau Open Bodybuilding Competitions held on August 12 and representing Macau in the Asian Games.

Macau Daily Times (MDT) – How did an 18 year old who went to Portugal to study law get involved with weightlifting?

Amanda Liu (AL) – Law is quite a difficult major and needs hard work to achieve that goal, but life needs balance. In fact, it was law that gave me the opportunity to open the door to another world, related to the fitness industry. In Portugal, like many other Western countries, sports and fitness is far more popular than in Macau. In Portugal I learned many things. It was there that I entered a gym for the first time. I also did not know a single word of Portuguese when I arrived. When I tried to study there I had obviously a lot of difficulties, especially in terms of the language barrier, as when we [Macau students] go to study in Portuguese universities we do not have any special support, we just have to study in the same way the Portuguese students do. We must be part of them, although it is not really possible, actually. When I started to go to the gym I started to speak better Portuguese as I knew a lot of people there, made some friends, and because we were talking about mundane topics and not law things it was a lot more fun to learn, and we could talk about the exercise and life in general. So it was a more relaxed atmosphere.

MDT – How did you move from fitness to powerlifting?

AL – I guess I had it in my genes, although that was not a realization I had at that time. Actually I only learned from my father last year that he was a weightlifter in China when he was young. He never told me about this and I had no idea. [It was] only after I started doing it he told me that, so I started thinking that maybe I do have that in my genes. But I started to [powerlift] through a friend I met at the gym who was a powerlifter. We started to train together and I found out that I really liked the strictness and perfection [in terms of movement and rules] and also because if you only work for muscle mass, it is difficult to see the progress and it is also something very subjective in which different people have different criteria to evaluate [that progress]. In weight lifting there is always a goal – lift more. If today I’m doing 100 [kilos] my next goal will be to lift 110 and then 120 kilos.

Lifting also carries a very good lesson for life, setting goals and working for them. You always look forward to the next day to give it a new try.

The purpose is always to move forward and to ignore all the obstacles.

MDT – You recently participated in and won a bodybuilding competition in Macau. What piqued your interest in bodybuilding?

AL – Yes, it was actually only my second time participating in a bodybuilding competition [and] on the first occasion I did not prepare anything. It was last year and I had just arrived back from Portugal and I was looking to see how to enter the fitness industry here, but I realized it was quite different and nobody was lifting in Macau. Most of people only go to the gym for “beauty” purposes and not for sport. As for the girls, they mostly just [do] cardio things and just want to “keep fit,” [so] I can say that the environment is quite different.

I went to the associations, namely the bodybuilding ones, but they only did bodybuilding, not other sports. But the coach there convinced me to give it a try [and enter] directly into a competition, so I was entering the stage without any preparation or knowledge about it. I even had ramen noodles one day before the competition, which is something that is “ridiculous” for a bodybuilding athlete. So I just entered the stage in high heels and just failed.

On the positive side, this led me to prepare properly this year and to have a very strict diet for around two and half months, as I was powerlifting before and I had a [powerlifting] competition in early June. So I really had to turn 180 degrees and go totally the opposite in terms of dieting and training, as lifting and bodybuilding are extreme opposites – totally incompatible – and they cannot co-exist at the same time.

So basically I had to change everything to have a totally different kind of body within three months’ time. But this adds knowledge and makes me get stronger and stronger in every sense, both in sports and in life, in body and in mind.

MDT – How do the fitness industries in Portugal and Macau compare?

AL – It is very different. In Portugal it has existed for many years and I can say that it is a very mature thing. Here, it is just beginning. We can see that by the number of gyms that have been opening [in Macau] in the recent years and also the number of people joining. But I think it is growing fast and many people are coming to the gym and sometimes we are completely full. Still, I think most of the people who look for gyms in Macau just [want] to “keep fit,” they are not so much focusing on physical conditioning or strength training. This is also due to the size of Macau and to the fact that the sports industry is not so developed. Macau has a lot of resources though, but people do not really know how to use those resources to develop sports. I think there is potential to do much better with the government’s financial resources. I’m quite positive about the development of this industry.

MDT – What is your next goal?

AL – In the beginning of October I will go to India for the Asian Games, also competing in bodybuilding. I hope and expect to find a much higher [level of] competition, as in the local competition we only had five contestants – these competitions [in Macau] are sectioned by weight categories, so in the end there is not much competition left.

I hope that in India I’ll have to do better and compete in a category with many contestants. I have no idea what to expect as it will be my first time, so I have no reference [point]. I’ve only seen videos online, those are my only reference [points]. But I saw there are very powerful contestants at these international level competitions. I hope to see and learn more there.

MDT – What about law? What stage are you at on that front?

AL – I am working full-time on that as a legal counselor in a law firm. Every day, I spend eight hours on legal work and every day I face a lot of challenges on that part as well. I like law a lot, but at the moment as I am spending a lot of my time practicing for my competition [so] I cannot dedicate much [time] to study[ing] for law examinations. I just do not have that much time to study hard for them, but I have not given up at all on my law goals. I love it, too.