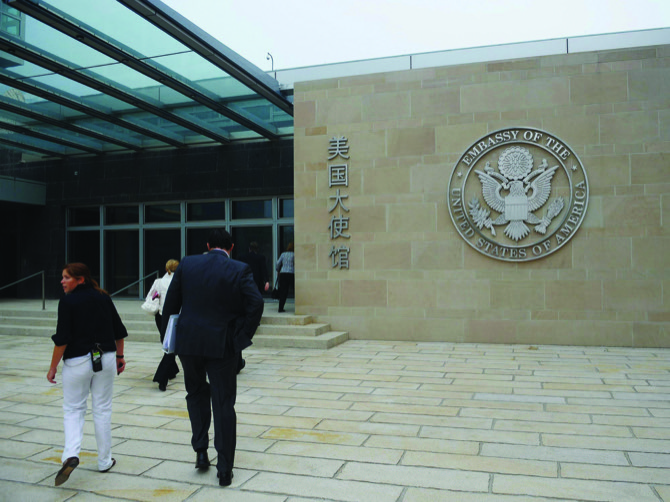 The U.S. Embassy in Beijing has in recent days posted Chinese translations of critical statements by top American officials on its official WeChat, the Tencent Holdings Ltd. social network with more than 1 billion users.

Then, on Monday, the account started publishing comments from a recent Secretary of State Michael Pompeo interview, in which he criticized the country for violating people’s human rights by detaining as many as 1 million members of its Muslim minority in “re-education camps.”

“These camps are clearly a Chinese effort to reduce the capacity for Chinese people to exercise their religious freedom,” Pompeo said in the interview, which originally aired on the Salem Radio Network’s Hugh Hewitt Show.

The posts send a signal that the Trump administration is willing to appeal directly to the Chinese people as its trade stand off with Beijing drags on, a strategy it has also used in dealings with Tehran.

The posts come after Pence complained that China was attempting to influence next week’s midterm elections by purchasing a newspaper advertisement criticizing his trade policies in Iowa and directing tariffs at key districts.

How long China will allow the practice to continue is unclear, since the Communist Party maintains tight internet censorship and restricts coverage of sensitive issues such as its treatment of the predominately Muslim Uighur minority to a few state-run media outlets. China’s foreign ministry didn’t immediately reply to faxed questions.

In May, the U.S. used its account on the Twitter-like Weibo service to post a White House statement criticizing as “Orwellian nonsense” China’s demands for airline booking sites to stop treating Taiwan as an independent country.

The U.S. has irked Chinese authorities with its social media accounts before, posting hourly air quality readings from monitoring stations at its local consulates on Twitter, calling official data into question and fueling debate about the country’s notorious pollution.

While the Chinese government initially criticized the practice, it eventually started publishing more reliable data and President Xi Jinping declared pollution one of the government’s three most pressing problems.

The comments from Pence and Pompeo have been more pointed, offering local internet users rare criticism of their leaders. For instance, Pompeo was quoted accusing Xi’s flagship Belt and Road infrastructure initiative of promoting corruption overseas.

“China shows up with bribes to senior leaders in countries in exchange for infrastructure projects that will harm the people of that nation,” he was quoted as saying in one comment posted by the Embassy. The U.S. Embassy in China did not respond to an email seeking comment. Bloomberg