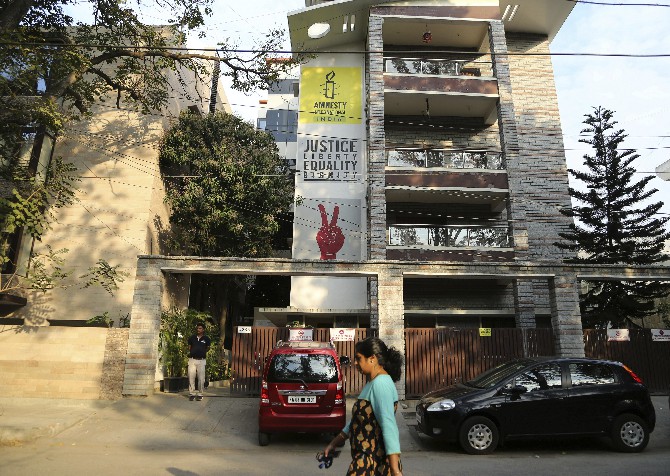 Human rights watchdog Amnesty International said yesterday that it was halting its operation in India, citing reprisals from the government and the freezing of its bank accounts by Indian authorities.
Amnesty International India said in a statement that the organization had laid off its staff in India and paused its ongoing campaign and research work on human rights, alleging that Indian authorities froze its bank accounts on suspicions of violating rules on foreign funding.
The statement said that the authorities’ actions were “the latest in the incessant witch-hunt of human rights organizations” by India’s government “over unfounded and motivated allegations,” and that the group’s “lawful fundraising model” was being portrayed as money laundering because it has challenged the “government’s grave inactions and excesses.”
Indian authorities did not immediately confirm whether Amnesty India’s bank accounts had been frozen.
Amnesty India’s executive director, Avinash Kumar, said the accounts were frozen as a result of the group’s “unequivocal calls for transparency in the government” and accountability of New Delhi police and the Indian government regarding “grave human rights violations in Delhi riots” and Indian-administered Kashmir.
“For a movement that has done nothing but raise its voices against injustice, this latest attack is akin to freezing dissent,” Kumar said in a statement.
Amnesty International said the only other country where it ceased operations was Russia, in 2016.
It is not the first time that Amnesty India has said Indian authorities targeted its operations. In 2018, Indian authorities raided its office and froze its bank accounts on similar charges.
In 2016, it faced sedition charges after Hindu nationalists objected to an event held in the southern city of Bangalore to discuss human rights violations in the disputed region of Kashmir. The charges were dropped three years later.
The rights group regularly accuses Indian authorities of committing human rights violations in Indian-administered Kashmir and has released multiple reports on the raging conflict in the region.
In 2019, the watchdog testified before the U.S. Foreign Affairs Committee during a hearing on human rights in South Asia and highlighted its findings on the use of excessive force and torture in Kashmir.
In August, it said Indian police violated human rights during deadly religious riots in New Delhi earlier this year and accused the police of beating protesters, torturing detainees and in some cases taking part in riots with Hindu mobs.
Authorities say more than 50 people were killed when clashes broke out between Hindus and Muslims over a controversial citizenship law in February in the worst rioting in the Indian capital in decades.
Amnesty International’s acting secretary general, Julie Verhaar, called the freezing of the bank accounts an “egregious and shameful act” by the Indian government.
“It is a dismal day when a country of India’s stature, a rising global power and a member of the UN Human Rights Council, with a constitution which commits to human rights and whose national human rights movements have influenced the world, so brazenly seeks to silence those who pursue accountability and justice,” Verhaar said in a statement.
Amnesty India has repeatedly condemned what it says is a crackdown on dissent and freedom of speech in India.
Its announcement to halt operations comes at a time when critics accuse Indian Prime Minister Narendra Modi and his Hindu nationalist government of increasingly brandishing laws to silence human rights activists, intellectuals, filmmakers, students and journalists.
Under Modi, critics say, India is growing notoriously intolerant, with its crackdown on dissent unprecedented in scale. Leaders of Modi’s party have routinely labeled critics as “anti-nationals,” and the authorities have dealt with many rights advocates and activists with an iron fist. SHEIKH SAALIQ, NEW DELHI, AP