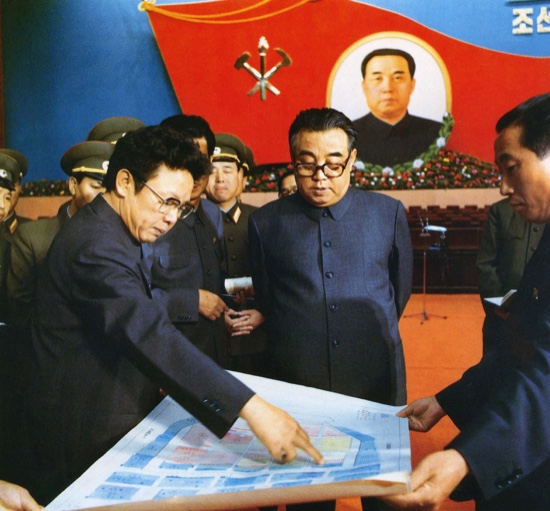 In this October 1980 photo provided by the Korea News Service (KNS), then North Korean leader Kim Il Sung (center), and his son Kim Jong Il (left), talk about the preparation for the convention of North Korea’s Workers’ Party in Pyongyang

North Korea, the world’s last great master of Cold War-era spectacle, is likely to deliver a big one when its ruling party holds its first congress in 36 years later this week.
What exactly is in store during the congress, which opens Friday and will be presided over by leader Kim Jong Un, remains a well-kept secret. But North Korea’s advances toward becoming a truly credible nuclear power are sure to be touted along with claims of economic advances in the face of the toughest global sanctions it has been hit with in decades.
Also not in doubt: Pyongyang wants the event to grab headlines around the world.
The normally well-sealed country has invited a horde of journalists from around the world to give the congress an international spotlight. The North has been promoting it relentlessly for months in its own state media and is vowing to make it a showcase of socialist success — both on the military and economic fronts.
The Rodong Sinmun, mouthpiece of the ruling Workers Party of Korea, said in an editorial Saturday that since the last congress in 1980, North Korea “proudly joined the ranks of advanced nuclear and space powers while demonstrating the might of the invincible politico-
ideological, military and youth power and is now dashing ahead toward to a socialist economic power and highly civilized nation.”
But while the congress promises to be a big moment in front of foreign cameras for Kim, who has yet to venture abroad or meet with any world leaders, its larger significance may be domestic.
Delegates for the congress will be brought in from all over the country for the political theater aspect of the event. They will likely generate a seemingly endless series of speeches hailing the party and its accomplishments, and will be tasked with formally appointing members of some key leadership committees. That will provide Kim the chance to get their formal stamp of approval on the lineup of lieutenants he has almost certainly already decided upon.
The North has worked hard over the past several months to keep the event foremost in the minds of the nation.
Even more so than usual, Pyongyang has been decked out with new posters, placards and decorations along its streets paying homage to the “motherly party” and the “party of victors.”
A 70-day “loyalty campaign” was held in which North Koreans from all walks of life were called on to demonstrate their devotion to the regime by boosting productivity and joining in ideologically charged group events.
The campaign ended on Monday, but masses of Pyongyang citizens are still practicing in squares across the city for rallies to mark the congress, another typical way for the government to mobilize carefully orchestrated and highly photogenic shows of popular support and national unity.
Internationally, Kim has already gotten a lot of coverage lately as the North’s propaganda machine churned out a heightened barrage of bluster and threats as the U.S. and South Korea massed for annual joint military exercises just south of the Demilitarized Zone. The war games, the biggest ever, followed North Korea’s latest nuclear test in January and a consequent new round of U.N. sanctions.
Much of the North’s verbal attacks were what Pyongyang watchers have come to expect every spring when the exercises are underway. But some of the propaganda, including photo ops with Kim standing beside a small nuclear warhead mock-up and gleefully watching missiles being launched from submarines, has prompted foreign military analysts to wonder if the North has made more progress with its nuclear and missile capabilities than previously thought.
South Korea, meanwhile, has warned another nuclear test may be in the offing, though open-source satellite imagery is inconclusive and Seoul’s predictions are often wrong.
Details about the congress, the seventh in North Korean history, are frustratingly few.
The last congress in 1980 lasted four days and was held in the ornate February 8 House of Culture, now called the April 25 House of Culture, both dates referring to North Korean military anniversaries.
More than 3,000 delegates attended. Representatives from friendly parties abroad were also invited.
The House of Culture now appears to be under construction, suggesting it is either being prepared for the convention or that the venue might be moved elsewhere this year.
The last congress opened with a speech by North Korea’s founder an “eternal president,” Kim Il Sung, and was used primarily to install his son, Kim Jong Il, as the next in line to rule. That succession didn’t actually take place until the elder Kim’s death in 1994, though Kim Jong Il had a primary position under his father in running the country.
Unlike his famously reticent father — Kim Jong Il almost never spoke in public — Kim Jong Un is expected to address the congress as his grandfather did. Eric Talmadge, Tokyo, AP