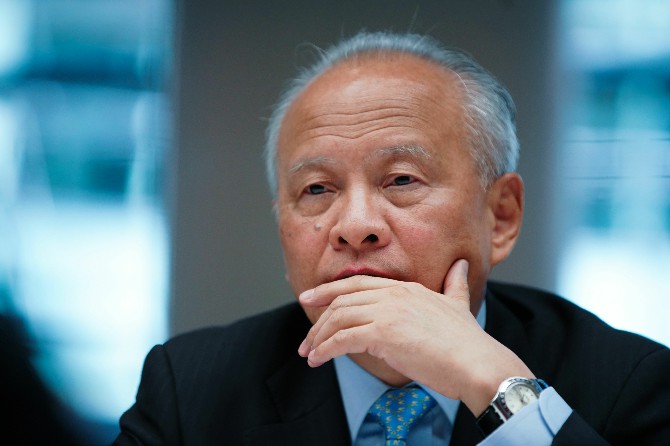 An unusual public spat between two top Chinese diplomats points to an internal split in Beijing over how to handle rising tensions with a combative U.S. president.
The differences spilled into public view yesterday after China’s ambassador to the U.S. reaffirmed his opposition to promoting theories that the virus that causes Covid-19 originated in an American military lab. Ambassador Cui Tiankai said in an interview with “Axios on HBO” that he stood by his Feb. 9 statement that it would be “crazy” to spread such theories, even though a foreign ministry spokesman has repeatedly floated the idea on Twitter in recent weeks.
“Such speculation will help nobody. It’s very harmful,” Cui told Axios. “Eventually, we must have an answer to where the virus originally came from. But this is the job for the scientists to do, not for diplomats.”
Cui’s comments represent a sharp public rebuke to foreign ministry spokesman Zhao Lijian, who has publicly questioned whether the virus originated in China and even touted the idea that it may have been introduced by U.S. Army athletes. Such public differences are rare among Chinese officials who are famous for their ability to stick closely to the Communist Party’s official line.
The developments suggest that China’s foreign ministry may be having second thoughts about taking a more confrontational approach toward President Donald Trump. The foreign ministry later Monday posted a Chinese-language transcript of Cui’s remarks on its website and another spokesman, Geng Shuang, told reporters “the virus should not be linked to a specific country or region to avoid stigmatization.”
“Ambassador Cui is a professional and an adult. His Axios comments should be taken as authoritative,” said James Green, a senior adviser for geopolitical consulting firm McLarty Associates who was previously a U.S. trade official in Beijing. “Having an MFA spokesman engage in such rumor-mongering is a new low for Chinese foreign policy, and I suspect for now such behavior will be curbed.”

‘Dangerous’ remarks
Trump’s blunt, Twitter-focused communication style has posed a diplomatic challenge for President Xi Jinping since he began attacking China on the U.S. campaign trail four years ago. While Xi’s government initially embraced a strategy of “strategic composure” that sought to avoid escalating disputes with Trump, Chinese diplomats such as Zhao began taking a more combative tone during the trade war — often on Twitter — and later got promoted.
While serving as deputy chief of mission at China’s Islamabad embassy last year, Zhao criticized U.S. racial divides in a string of tweets, prompting former U.S. National Security Adviser Susan Rice to call him a “racist disgrace.” In recent weeks, Zhao has promoted theories that the coronavirus roiling the world was present in the U.S. before the outbreak in China, a narrative that also circulated on state media.
Such rhetoric has prompted a debate among Chinese diplomats. One official said that Zhao’s approach had been vocally welcomed by many inside the foreign ministry. Another expressed relief that Cui had disowned Zhao’s “dangerous” remarks.
The comments have also stirred anger in Washington, with U.S. Secretary of State Michael Pompeo urging China’s top diplomat, Yang Jiechi, in a phone call earlier this month to stop trying to “shift blame.” Trump has taken to calling the pathogen the “Chinese virus” and has blamed the U.S.’s outbreak on China’s early failures to control the disease.
“As you know China tried to say at one point — maybe they stopped now — that it was caused by American soldiers,” Trump told reporters March 18. “That can’t happen. It’s not going to happen, not as long as I’m president. It comes from China.”

Tamping down
Zhao continued to perpetuate the theory Sunday, retweeting speculation from a Twitter user who goes by the name “the lizard king” that Covid-19 has been around in America “for a while.” The user is described as a “fl transplant to the desert,” a “mama” and “not an expert.”
Asked by Axios about Zhao’s comments, Cui referred the question back to the spokesman. Cui is appointed directly by Xi and holds a vice-ministerial rank in China’s political hierarchy, two levels senior to Zhao.
“Maybe you could go and ask him,” Cui said. “I’m here representing my head of the state and my government.”
China’s foreign ministry has long faced accusations of weakness during periods of heightened nationalism. In the 1990s and 2000s, Chinese diplomats regularly received calcium tablets in the mail from citizens who wanted them to strengthen their backbones, according to people familiar with the matter. Others nicknamed the agency Maiguobu, or “ministry of traitors.”
Yesterday, the foreign ministry sought to tamp down the controversy.
“The origin of the coronavirus is a matter of science that requires scientific and professional assessment,” said Geng, the other spokesman. “All countries need to work together to fight the disease. Trying to shift the blame at this particular time will not help in combating the epidemic at home or help the international response.” Bloomberg