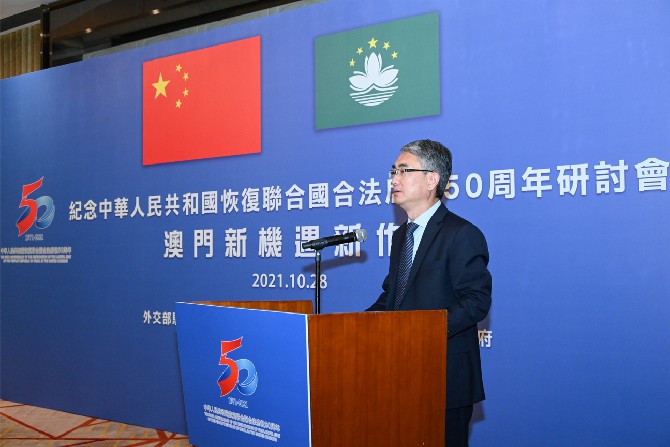 The People’s Republic of China (PRC) seat at the UN was crucial to the change of sovereignty in both Macau and Hong Kong, André Cheong, Secretary for Administration and Justice said yesterday.
Cheong recalled that, 50 years ago, both the now Special Administrative Regions were taken off the UN list of colonies as the result of a UN Resolution.
The government and the Office of the Commissioner of the Ministry of Foreign Affairs in the Macao Special Administrative Region co-hosted a forum on the 50th Anniversary of the seat of the PRC at the UN, with attention paid to the impact of the event on the country.
Since 1999, Macau has participated in UN meetings and sessions representing either the SAR itself, China or as part of the Chinese delegation.
As one of the presiding guests of honor, Cheong gave a keynote speech at the event, in which he discussed Macau’s position in the UN and the implementation of UN treaties among other topics.
The Secretary stressed that PRC’s position and seat at the UN is of utmost significance to Macau’s return to the motherland and the expansion of international relations.
After the change of sovereignty, he said, the Macau SAR has become deeply integrated into the multilateral treaty system, participating extensively in international conferences, and has achieved fruitful results in its foreign work.
In the future, Macau will play a more active role in the interaction between the country and the world, actively researching and exploring avenues for diplomacy, making good use of external resources, and promoting the economic recovery and long-term development of the SAR.
Commissioner Liu Xianfa was also a presiding guest of honor who, like Cheong, gave a keynote speech. In his speech, Liu said that President Xi Jinping’s important speech on the occasion carried great practical significance and far-reaching historical impact.
For 50 years, he said, China has consistently been a “builder of world peace, a contributor to global development, and a defender of international order, and has made historic contributions to the cause of the UN and the peaceful development of mankind.”
The event 50 years ago is an important moment in the centuries-old history of the Communist Party of China, and its centralized, unified leadership is the root of China’s historic diplomatic achievements.
In a locally-focused section of his speech, Liu pointed out that Macau has played an important role in the cooperation between China and the UN, and has made positive contributions to the country’s diplomacy overall.
As a centrally-appointed entity, the Foreign Affairs Office will continue to support Macau in combining its political positions of leaning on the motherland and facing out to the world. It will continue to consider the needs of the country with all the strengths of Macau, to support the state with efforts from the SAR, and to give full play to the potentiality of the SAR in terms of humanity, society, location and external connections. This approach will ensure that Macau can be more active and promising during the development of foreign exchange and cooperation.
Other speakers such as Liu Dexue, director of the Legal Affairs Bureau of Macau, Ho Teng Iat, president of the The Women’s General Association of Macau, Choi Man Cheng, executive director of the Macao Youth Federation, addressed Chairman Xi Jinping’s important speech at the commemorative meeting, the significance of the event, and China’s contribution to the United Nations. They spoke of the matter in glowing terms.
The speakers also shared Macau’s role and practices in the cooperation between China and the UN from their separate perspectives, and made suggestions about how Macau could participate further in the cooperation between China and the UN, and to promote the building of a community for a mankind with a shared future.
Counselor Wang Chen of the Commissioner’s Office discussed China’s work at the UN and the ways in which Beijing and the Commissioner’s Office support Macau in its participation in UN affairs.