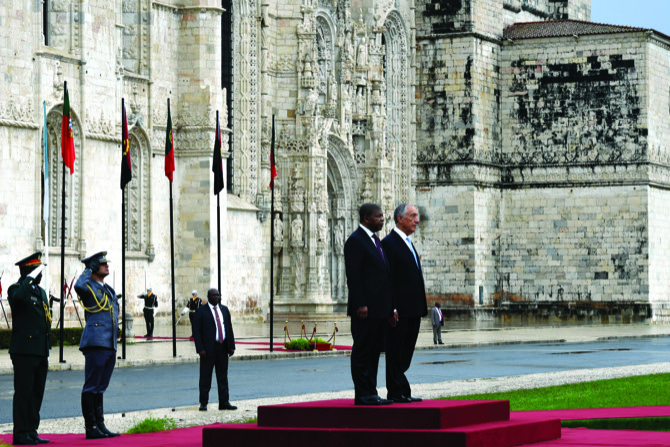 Lourenço (front left) and the Portuguese president, Rebelo de Sousa, pictured in front of the Jerónimos Monastery in Lisbon

The Angolan president returned to Luanda on Sunday, after a three-day state visit to Portugal in which the two countries signed a set of 13 cooperation agreements, the Portuguese press reported.

In the final statement, the government delegations of Angola and Portugal considered that the visit by President João Lourenço to Portugal was of high political significance, which was clear in the meetings between the heads of state of the two countries.

In a press conference held in Lisbon, Lourenço said he had “reassured” officials from Portuguese bank Banco Comercial Português (BCP) about the possibility of the Sonangol ceasing to be a shareholder of the bank, in which it has a stake of 19.4 percent.

Lourenço was also given a guarantee by Prime Minister António Costa that Portugal will “provide all the cooperation needed so that the money that belongs to Angola, Angola is accounted for.”

President Lourenço invited his Portuguese counterpart from Portugal to visit Angola in 2019, an “invitation that has already been accepted” and in the first half of 2019 a “new round of political consultations at the level of senior officials” will be held in Luanda as well as a meeting to assess the implementation of the Bilateral Protocol on Visa Facilitation. MDT/Macauhub