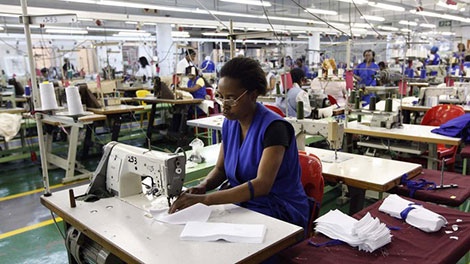 The recovery of Angola’s textile industry, with machinery imported from Japan, South Korea and China, is a major step forward in diversification of the economy, which is still dependent on raw materials and especially oil.
The Economist Intelligence Unit specifically indicates that the refurbished and modernized África Têxtil, Textang II and Satec factories are “a positive step to diversify the Angolan economy,” even though those projects are not large enough to substantially alter the economic growth forecast.
But the resurgent sector, which played an important role in the pre-independence economy, is expected to create nearly 2,700 jobs along with more indirect employment, besides “helping diversify the economy beyond oil and gas.”
The government is also encouraging cotton planting. A new area comprising 74,000 hectares and partly financed by South Korea is planned in Kwanza Sul, once the center of cotton production.
The Agriculture Ministry aims to achieve annual production of 100,000 tons of cotton, 40 percent of which from small producers and the rest from large plantations.
The three restored textile factories in Benguela, Luanda and Kwanza Norte should start operating at the end of this year. Plans call for two new factories to be built in 2015.
The work is headed by the Japanese Marubeni group, via a US$1 billion credit line granted by Japan.
Diversification of the economy to shield it against volatile oil prices has been on the Angolan political agenda for many years and should be backed by US$5 billion provided by the Angolan Sovereign Fund launched in October 2012.
Deutsche Bank figures indicate that oil accounts for about half of Angola’s gross domestic product, 95 percent of its exports and 75 percent of its tax revenue.
Despite efforts to diversify the economy, the oil sector “will continue to be crucial” in the next several years, the Economist Intelligence Unit asserts.
The EIU forecasts that the Angolan economy’s growth pace will rise from 3.6 percent last year to 4.5 percent in 2014 and 6 percent in 2015. MDT/Macauhub