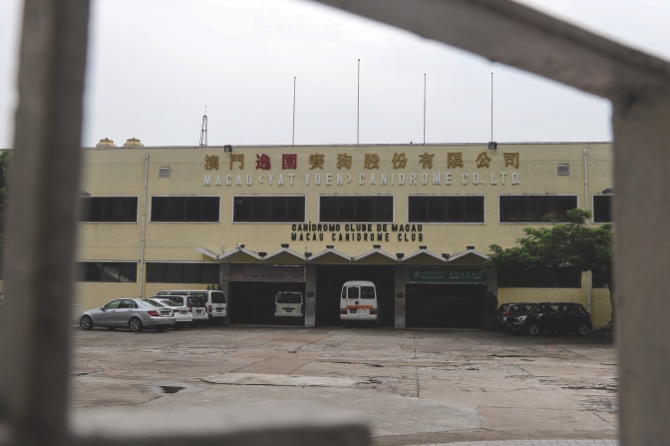 In a meeting held yesterday between the director of the Gaming and Inspection Bureau (DICJ) Paulo Martins Chan and representatives of the Canidrome (Yat Yuen) company, it was revealed that the government is presenting the greyhound racing facility with an ultimatum: close down or relocate to another site.
The Canidrome was informed that a decision must be made shortly, though an exact timeframe was not provided. According to a statement from the Government Information Bureau (GCS), the company would have two years in which to procure a new space.
Moreover, the DICJ director insisted that should the company opt to relocate, the new facility would be required to demonstrate an improvement in the treatment of greyhounds, in accordance with international standards.
However, Anima (Macau) president Albano Martins told the Times that the ultimatum presented to the Canidrome is merely a guise for a decision already taken by authorities to close the facility. He described the announcement as “the death kiss,” in reference to a mafia term that indicates a member of a crime family has been marked for death.
Martins argues that “there is no real decision here […] even if the Canidrome has been given two options.”
“The government doesn’t want to say that they have two years and then must close, but this is what they are effectively saying,” he reasoned, adding that the option to relocate is “impossible.”
Although only limited information was released in the GCS statement yesterday, one justification for the relocation might be to protect workers employed by the company. In the event that the facility closes, the Canidrome will be “responsible for paying […] compensation to their employees for termination of employment contracts, and will still be responsible for the relocation and removal of greyhounds from the site,” it reads. The Labor Affairs Bureau will follow up the employment issues if required.
This has caused Martins much frustration who says he doesn’t understand why so much time has been allotted to the company who will continue to use, kill or sell the greyhounds to mainland China or possibly Vietnam during this period.
In a letter dated July 11, from Anima president Albano Martins to Secretary for Economy and Finance Lionel Leong, Martins wrote that the decision to close the Canidrome would be “without doubt the best decision that the government will take, from an economic, community and animal welfare point of view.”
He also asked the secretary in the letter “to convince the Macau (Yat Yuen) Canidrome Company Ltd., and through it the other greyhound owners, to provide all of those animals to Anima, when the decision for its closing is announced, as we believe will happen shortly.”
Then the plan was to “try to obtain the necessary financial support to be able to deal with these animals and prepare [their] adoption, which, we believe is only possible internationally, as Macau can only absorb a small number of them.”
Angela Leong, managing director of the company, stated yesterday that she respects the decision and pledges a solution before the end of the two-year breathing period.
Albano Martins thinks that this is a ploy by the government to secure the land for itself. “For sure the government wants the land,” he said, “they are just protecting themselves with this [ultimatum].”
In the meantime, it is likely that the Canidrome will be free to continue its racing activities and that it will continue to be subsidized by the government, the Anima president believes.
DICJ could not be reached yesterday for a comment on the matter.