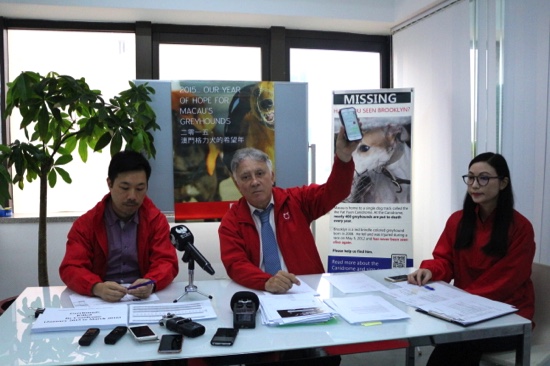 The Society for the Protection of Animals (Anima) criticized the Macau (Yat Yuen) Canidrome, for failing to respond to Anima’s call for a televised public debate over the closure of the greyhound-racing stadium.
Albano Martins, president of Anima reiterated that only three dogs have been adopted since the Canidrome introduced the adoption scheme back in 2012 following an order from the government.
During Anima’s press conference yesterday, Martins publicizes the content of his letter to Lei Chi Man, executive director of Macau (Yat Yuen) Canidrome Company Ltd., which included his request for the discussion of the Canidrome’s “historical values and importance” to the city’s economy, community and animal welfare.
“The letter we sent to them was tough and straight to the point. If you have your reasons, please discuss [them] with us. You know better than us but we’re not afraid to discuss with you,” said Martins.
The animal protection group has repeatedly asked the government to reduce the importation of greyhounds into Macau to avoid the number of animals that get killed, however the group claims that the authorities “did nothing.”
“This should be a good opportunity for them to inform us, to discuss freely with us their arguments. […] They think this is useless,” said the president.
Meanwhile according to Anima’s president, 260 to 280 underperforming dogs were killed last year at the Canidrome, but claims that only five or six were euthanized this year between February to April.
“When the animal begins to lose races, they’re going down to the lower levels, and after that they are killed. Then, [the Canidrome] will buy another one. […] Buy then kill, buy then kill,” explains Martins.
He recalled that the Canidrome used to buy the greyhounds from Australia, which would then be sold in public auctions to gamblers mainly from China, until Australia blocked such exports.
“In the beginning, we only asked for adoption. We didn’t want to close the track. But they only produced four dogs for adoption. Who adopted them? Some vets,” stressed Anima’s president.
He added that it is time for the government to give the Canidrome land to the surrounding community, as the area is the most populated zone in the region.
Martins stressed that the Canidrome only makes little money, stating that the income they earn over a year is only equivalent to five hours of casino earnings. He added that the government had already lost around MOP300 million over the past few years on the Canidrome after reducing the income tax of the company to 25 percent.
Anima claims that their strategy to reduce the number of dogs being euthanized is to block the importation of greyhounds as the local government fails to have an animal protection law.
“No courage at all, they [the Canidrome] are cowards,” Martins expressed. “If they have reasons, show us.”
Conversely, Anima claimed that its organization supported the regional animal welfare march on Sunday, which was organized by another animal rights group, the Abandoned Animals Protection Association of Macau (AAPAM).
“We were not invited as co-organizer but we asked our members and friends to be there and we told them not to bring anything regarding the Canidrome,” he said. “Now we see that they [AAPAM] are supporting the closing [of the Canidrome].”
Earlier, Anima accused AAPAM of collaborating with “voice of the industry,” claiming that the association has been co-organizing events with the Canidrome company.  Staff reporter