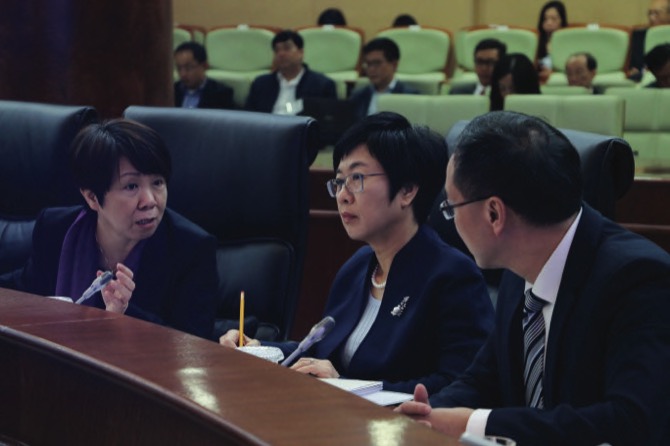 After a two-year investigation, the Commission Against Corruption (CCAC) has found that Macau’s incumbent Secretary for Administration and Justice and her predecessor did not violate the law in recommending their relatives to the Office of the Prosecutor General, at the time headed by Ho Chio Meng.

In December 2016, while standing trial at the Court of Final Appeal accused of corruption, former Prosecutor General Ho Chio Meng alleged that his Office had hired personnel based on the recommendations of the Macau’s incumbent Secretary for Administration and Justice, Sonia Chan, as well as her predecessor, Florinda Chan.

Shortly after the revelations, Sonia Chan came forward to acknowledge her recommendation, but denied exerting any pressure on the public prosecutor. The Secretary was at the time of the recommendation the chief of the Office for Personal Data Protection.

The CCAC received complaint letters soon after Ho Chio Meng’s remarks were reported by the media and, pursuant to Law no. 10/2000 “Organic Law of the Commission Against Corruption of the Macao Special Administrative Region,” it carried out an investigation.

In January 2017, Macau Daily Times made several enquiries with the anti-graft commission to determine whether it had any intention of investigating the case, but those requests for information went unanswered.

According to the testimony given by Ho Chio Meng during his trial in late-2016, former Secretary for Administration and Justice Florinda Chan once phoned him to recommend her younger brother, Roque Silva Chan, for the prosecution service.

Roque Silva Chan was later hired by the Office of the Prosecutor General. Prior to that he worked for a law firm for almost 20 years, where he was responsible for formalities of real estate transactions and clerical work. In September 1999, after being dismissed by the law firm, Roque Silva Chan was hired as a part-time worker by a trading company.

In November of that same year, Roque Silva Chan started to work at the Preparation Office of the Prosecutor General. According to the CCAC report, in the following January, the assessor of the Office of the Prosecutor General wrote a proposal recommending that Roque Silva Chan be employed as a third grade assistant technical specialist with 380 salary points. The proposal was approved by Ho Chio Meng on the same day.

Interviewed by the anti- graft authority, Roque Silva Chan said that his employment at the Office of the Prosecutor General was obtained by result of his own application, rather than the recommendation of Florinda Chan.

Florinda Chan also told the CCAC that she had never recommended Roque Silva Chan to Ho Chio Meng and that she “felt strange about Ho Chio Meng’s remarks at the court hearing.”

Ho Chio Meng later changed the statement he made during his trial, correcting that he could not accurately remember the details of how Roque Silva Chan had been hired.

Nevertheless, upon investigation and analysis, the CCAC said it “believed it was difficult to completely rule out that the then Secretary for Administration and Justice designate, Florinda Chan, had recommended the employment of her brother.”

In fact, evidence uncovered by the anti-graft body suggests that Roque Silva Chan may not have been a strong candidate for the role on paper, and that there is “reasonable doubts in the incident.”

“Roque Silva Chan had only finished 9th grade of education at that time and the CV he sent had fewer than 100 words – one could hardly tell he excelled others in terms of academic knowledge or work experience,” notes the CCAC conclusions released yesterday. “Nevertheless, the then Prosecutor General designate, who did not know him personally, allegedly interviewed him and hired him immediately.”

The case of Sonia Chan, the second government official accused by Ho Chio Meng of having used her influence to secure a job, is recalled by both parties more clearly. While both agree that a telephone call took place, the incumbent Secretary contends that she did not exert any pressure on the Prosecutor General to hire her relative.

During the investigation, it was found that the relative in question is her elder sister, Chan Hoi In.

Before joining the Office of the Prosecutor General, Chan Hoi In, having a diploma in administrative management, used to work for a civil association in Macau and her main duties were writing, event planning and venue decoration. In July 2008, the then-Chief of the Office of the Prosecutor General, Lai Kin Ian, wrote a proposal which suggested employing Chan Hoi In as a first grade assistant officer of second rank with 320 salary points. The proposal was approved by Ho Chio Meng later that same month.

Questioned by the CCAC, Chan Hoi In said that she applied to several government services at the time, before receiving an interview with the Office of the Prosecutor General, during which she did not mention her kinship with Sonia Chan, who at the time headed the Office for Personal Data Protection.

After learning her elder sister wanted to change jobs and had already applied to several public services, Sonia Chan admitted to telling Ho Chio Meng she could recommend a candidate for a job vacancy at his office if needed. Ho Chio Meng argued during his trial that Sonia Chan had actively lobbied for her sister, asking if he could find her suitable work.

The Commission Against Corruption noted in the report that since the statements of all the parties are “basically consistent,” it finds the case is substantiated. While noting that the recommendation is not good practice for a transparent government and would probably constitute an illegality today, the CCAC points out that no such regulation existed at the time of the recommendation. Therefore, there is no basis for the agency to call for disciplinary action against the Secretary for Administration and Justice.

Officials of their times

The recommendations for the hiring of Roque Silva Chan and Chan Hoi In, who joined the Office of the Prosecutor General under Ho Chio Meng’s approval in 1999 and 2008 respectively, both occurred prior to the establishment of the legal regime of central recruitment and at a time in Macau when the Prosecutor General had the discretion to “freely appoint workers.”

Article 5 of Administrative Regulation no. 24/2010 “Statute of Principal Officials of the Macao SAR” says that principal officials are required to prevent conflict of interests and shall not make use of their official status directly or indirectly to seek personal interests, while Article 11 of Law no. 15/2009 “General Provisions of the Statute of Leadership and Management” stipulates that individuals in leadership positions shall behave ethically so that their personal behavior will not adversely affect the image of the Macau Government or the services or entities they serve.

However, both regulations were introduced in Macau after the alleged recommendations made by Florinda Chan and her successor. Therefore, the CCAC concludes that neither recommendation violated the laws at that time, given that there was no specific law on the conduct of principal officials designate or leaders designate of public services.

The CCAC has submitted its investigation report to the Chief Executive, as well as further suggestions for improvements to the accountability system for officials.