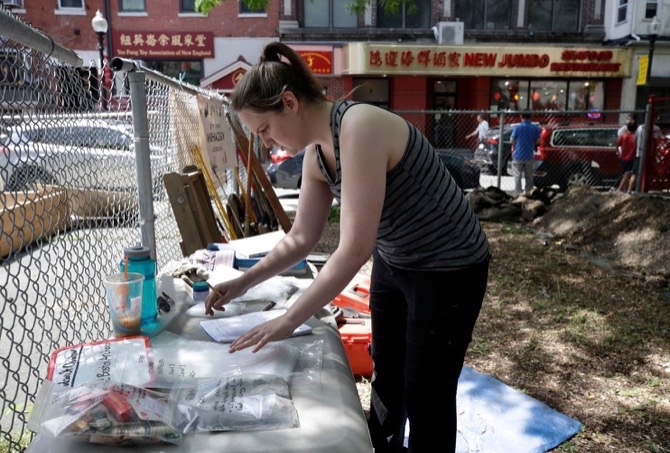 Boston is literally digging its Chinatown.

City archaeologist Joe Bagley yesterday [Macau time] launched the first excavations in Boston’s Chinatown, and he expects the dig to turn up artifacts that will shed new light on immigrants — not only those from China but also Syria, Ireland and England who sought new lives in Boston from 1840 to 1980.

Work began at a vacant lot near the ornate gate to the colorful neighborhood. It’s expected to continue until early autumn.

“We’re excited to conduct the first archaeological dig in Boston’s historic Chinatown,” said Mayor Marty Walsh. “Boston is a city of immigrants, and this is an important piece of Boston’s history.”

Over the years, Boston has unearthed hundreds of archaeological sites.

“Digging into Boston’s past is an exciting experience,” said Bagley, who has led recent excavations of an outhouse next to Paul Revere’s home and the boyhood home of civil rights activist Malcolm X.

Carole Mooney, a volunteer, sifted through topsoil at the site and found pieces of porcelain, other pottery and brick. “It all helps tell the story,” she said.

Organizers say the property owner, residents of Chinatown, the Chinese Historical Society of New England and residents of Boston’s Syrian community are involved in the dig.

In the late 1800s, the neighborhood — now popular with tourists for its restaurants and groceries — drew thousands of newcomers attracted by cheap housing and plentiful warehouse jobs in the adjacent Leather District.

Because the area was underwater until around 1830, researchers don’t expect to find much of interest prior to then, Mooney said.

But this is Boston, so you never know.

“At the Malcolm X dig, we found a cannonball,” she said. “It shouldn’t have been there — we still aren’t sure how it got there — but there it was.” William J. Kole, Boston, AP