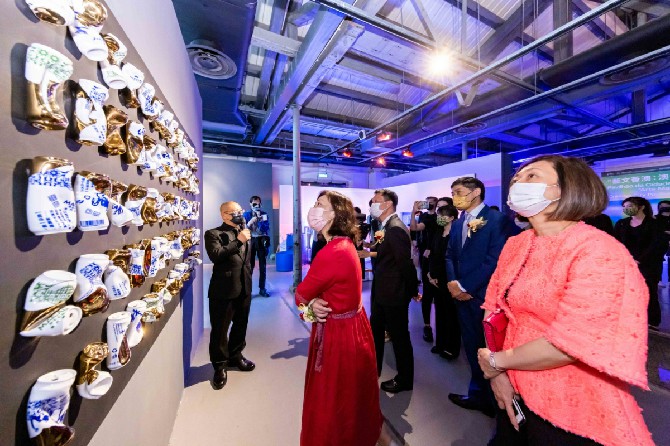 The Art Macao: Macao International Art Biennale 2021 continues to inject fresh creativity into Macau’s culture, with a new exhibition “Macao: City of Gastronomy – Bon Appétit!” It is one of four art shows featured in the festival’s debut art project, Creative City Pavilion, which unfolded its red carpet on July 22.
Creative City Pavilion is specifically curated to showcase the distinctive cultures of four UNESCO Creative Cities, namely Macau – City of Gastronomy, Wuhan – City of Design, Nanjing – City of Literature and Linz – City of Media Arts.
“‘Creative City’ is a hot topic at present,” chief curator of the Creative City Pavilion Yao Feng stated in the opening ceremony of Macao: City of Gastronomy – Bon Appétit, last Thursday night.
“The construction of a creative city should not be narrowly defined by ‘creative economy’ to attract tourists; it should pay more attention to the citizens, who are the masters of the city and subjects of constructing a creative city,” Yao emphasized.
With this perspective, Yao brought together artists and writers of the four cities to put together the Creative City Pavilion — a platform to showcase their literary and artistic masterpieces, including oil painting, installation, literary manuscripts, photography, and more.
Among all four exhibitions, the Macau-themed exhibition highlights Macau’s status as a “UNESCO Creative City of Gastronomy” as of 2017, featuring 15 pieces or sets of art pieces conceived by 16 artists. They include Carlos Marreiros and Konstantin Bessmertny, who explore the interplay of food in relation to society and history.
“Macau has a variety of cuisines, and behind the cuisines are the emotional stories of human beings. The stories we tell through food represent common values shared by people living in this city: diversity, tolerance, empathy, and appreciation for different cultures,” president of the Cultural Affairs Bureau Mok Ian Ian stated.
The Macau-themed exhibition will take place at the Macao Contemporary Art Center – Navy Yard No. 1 is ongoing until October 3. Its inauguration ceremony was officiated by key officials and executives of local leading casino operators on July 22.
The other three exhibitions — featuring the cultural theme of Nanjing, Wuhan and Linz — will be held at Tap Seac Gallery, No. 63–71 Mong-Ha Villas and No. 55–61 Mong-Ha Villas, respectively.

Director of the Macao Government Tourism Office (MGTO) Maria Helena de Senna Fernandes has called on local hotel operators to offer more information regarding the safety of entertainment facilities.
Fernandes’ remarks came on the sidelines of an event last Thursday, after the MGTO received a complaint lodged by a previous attendee of the Studio City Water Park.
In order to avoid unnecessary misunderstandings, she suggested the operator offer more safety information to patrons to help them fully appreciate the possible hazards of the theme park before participating.
She told the media that the incident at the water park, operated by Melco Resorts & Entertainment, requires further investigation, to be conducted by the relevant department.
The license for the facility was granted by the Municipal Affairs Bureau (IAM), which is also responsible for overseeing the facility.
On July 19, a user stated in a social media post that she suffered from a bone fracture while playing on a slide at the Studio City Water Park.
In an earlier interview with the Times, Chimmy Leung, executive director of Corporate Communications of Melco, reiterated that “the Water Park has gone through a number of safety checks prior to licensing and opening.” HT