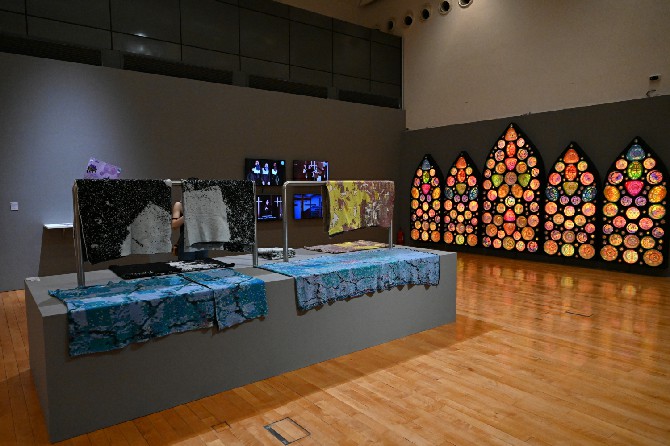 The Art Macao: Macao International Art Biennale 2021 (Art Macao 2021), a four-month mega art event held every two years, officially rolled out the red carpet yesterday afternoon.
“Cultural development has long remained one of the top priorities of the SAR government,” president of the Cultural Affairs Bureau Mok Ian Ian said at the opening ceremony.
Art Macao 2021 is a part of the government’s endeavor to “develop a base for exchange and cooperation with Chinese culture as the mainstream and [encourage] the coexistence of different cultures,” she said.
She stated that the government is committed to mounting “Art Macao” on a biennial basis, in a bid to consolidate Macau’s position as a “World Centre of Tourism and Leisure” and a “Creative City of Gastronomy.”
Other key objectives are to foster the exchange of Chinese and foreign cultures locally, promote interpersonal connections, and accelerate the development of Macau’s cultural industries, Mok said.
Yesterday’s opening ceremony coincided with the kick-off ceremony of the Main Exhibition, themed “Advance and Retreat of Globalization,” and curated by China’s renowned award-winning artist Qiu Zhijie.
“Macau is distinctively charming,” Qiu said, adding that because the event will be “held in such a city abounding in resources, the biennale is expected to become an important artistic event that impacts the world.”
Aside from the Main Exhibition, the organizers will progressively unveil the other five exhibitions in the coming four months, namely “Special Exhibition of Resorts and Hotels,” “Creative City Pavilion,” “Public Art Exhibition,” “Selected Works by Local Artists” and “Collateral Exhibition.”
The ceremony was attended by key officials yesterday, including the director of the Macao Government Tourism Office (MGTO) Maria Helena de Senna Fernandes, director of the Department of Publicity and Culture of the Liaison Office of the Central People’s Government in the Macau SAR Wan Sucheng, and others.
Executives from six casino concessionaires and a number of artists also took part in the event.
This year marks the second Art Macao event since its debut in 2019. It features 30 art exhibitions in 25 locations. According to official data, the inaugural Art Macao in 2019 attracted upwards of 16 million participants.