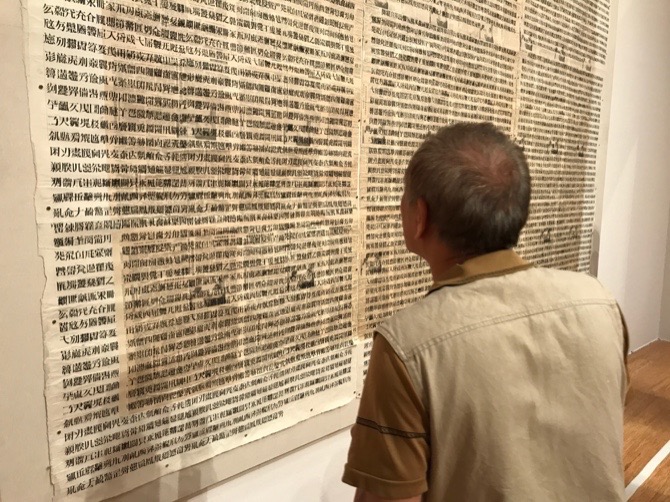 Currently occupying two floors at the Macau Museum of Art in a colossal solo exhibition, the works of Chinese contemporary artist Xu Bing are intimidating to the uninitiated.

It is difficult to know where to begin with some of his works, especially the few that measure at least 10 meters in length and are accompanied by minimal explanatory wall text.

But a good place to start is at the focal point of the exhibition: two contrasting works, “Book From the Sky” and “Book From the Earth”, which together constitute Xu’s magnum opus.

A set of lengthy scrolls located in the center of the exhibition are inscribed with thousands of Chinese characters. At least, that is how they appear to the untrained eye. In fact, each of the nearly 4,000 unique characters is an imposter, masquerading as Chinese.

Xu designed each of the 4,000 characters and brought them to paper using the antiquated Gutenberg printing method. They are arranged in such a way as to mislead the viewer into thinking that there is a message to be uncovered if only the work could be decoded.

But there is no message and it cannot be decoded.

This is Book From the Sky, an unintelligible composition of bogus characters – unbeknownst to non-Chinese readers, but equally unreadable to the Chinese.

Literacy is one of the success stories of modern China, having been one of the earliest and highest priorities of the Communist Party. Literacy rates on the mainland made their own great leap forward in the second half of the century, climbing from just 20 percent in 1950 to almost full literacy in 2015.

The Chongqing-born artist, who reached adulthood during the Mao Zedong years, witnessed widespread illiteracy among his compatriots in the latter decades of the 20th century.

Book From the Sky, dated from the late 1980s, is Xu’s way of communicating to his compatriots the struggle of their illiterate ancestors. It forces the viewer to experience the redundancy of looking at written language without the tools to interpret it.

Conversely, Book From the Earth is written entirely with symbols and pictographs in a language that anyone can read and understand.

“I think that this is the first book that everyone can read – anyone in the world – because this book goes [beyond] the cultural location [of the viewer] and their education level,” Xu said in an exclusive interview with the Times. “[Whereas] my other works, nobody can read them – not even myself!”

Starting from 1994, Xu began designing a different set of unintelligible characters. This set took English-language words, disassembled them and rearranged them into a character composition using Chinese-style strokes.

Look once and you will overlook the piece. The characters require careful study and a great deal of patience to read, but cracking the code is rewarding.

“Chinese characters are really unique from any other kind of language,” said Xu. “Even before the Communist [victory] in 1949, [the leaders of China] made their written language more [alphabet-driven], using styles like pinyin.”

As a gift to Macau, Xu presented at the exhibition’s November 8 opening his first Chinese-Portuguese piece in the New English Calligraphy style. His text of choice for the piece was Viola Chinesa, a famous poem by Camilo Pessanha, who lived and died in Macau.

“I didn’t really study or research about this poem,” admitted Xu, but he thought its Macau significance made it appropriate. “I have liked using this [mix of] Portuguese and Chinese calligraphy,” he said.

The exhibition, titled “Language and the Art of Xu Bing” is open to the public at the Macau Museum of Art until March 4, 2018.