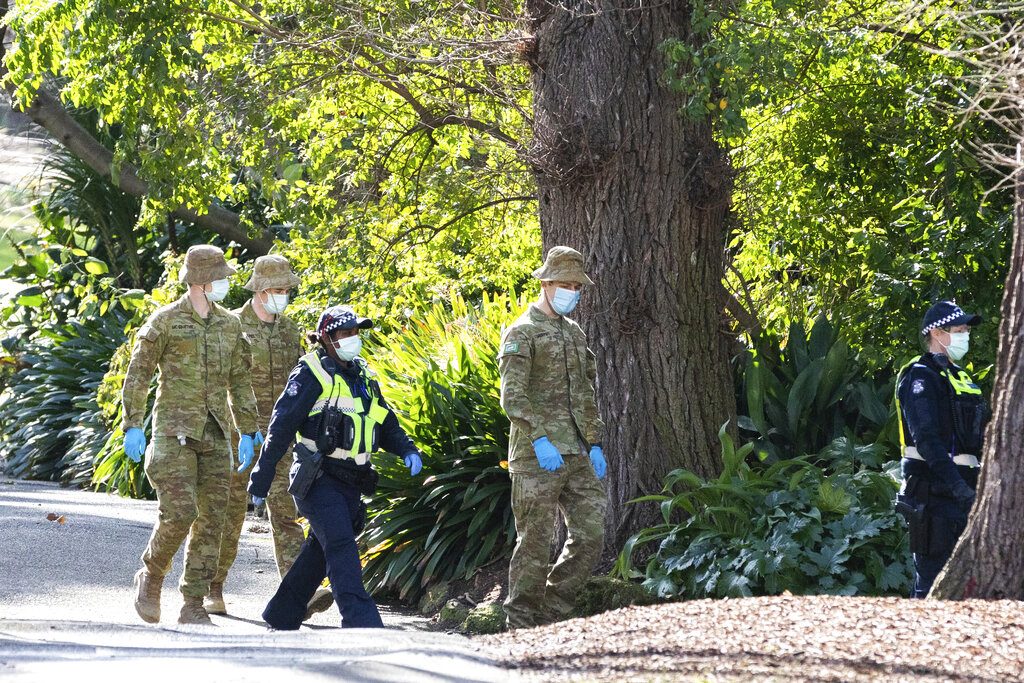 Australian Defence Force staff (ADF) and Victorian police are seen on patrol as a lockdown of Melbourne forces people to stay at home if not working due to the continuing spread of COVID-19, Wednesday (AP Photo/Asanka Brendon Ratnayake)

MELBOURNE — Australia’s hot spot State of Victoria announced a record 725 COVID-19 cases and 15 deaths today (Wednesday), while businesses in Melbourne city prepared to draw down their shutters as new pandemic restrictions are enforced.
The 24-hour record was marginally higher than the 723 cases and 13 deaths reported last Thursday.
From late Wednesday, many non-essential businesses including most detail retailers, hair-dressers and gyms in Australia’s second-largest city will be closed for six weeks. People employed in essential jobs will have to carry passes under Australia’s toughest-ever lockdown restrictions.
Like Melbourne hospitals, Victoria Premier Daniel Andrews announced that non-emergency surgeries will be restricted in hospitals in regional Victoria, where infections rates are lower.
“It will be very challenging, but it is necessary to drive these numbers down,” Andrews said of the new restrictions.
He added that the “notion of more than 700 cases is not sustainable.”
A Victoria state government website crashed on Wednesday when it was overwhelmed by employees in essential services applying for permits that would allow them to leave home for work from Thursday.
In other developments in Asia and the Pacific:
— India has reported more than 50,000 new coronavirus cases for an eighth straight day, taking the country’s number of confirmed cases since the pandemic began past 1.9 million. The Health Ministry on Wednesday reported a spike of 52,509 new cases and 857 new deaths in the past 24 hours. The ministry said India’s recovery rate among COVID-19 patients has touched 66.31%. It also said a record 661,892 samples were tested in the last 24 hours, taking the cumulative testing to more than 2 million. It also said that 50% of deaths have happened in the age group of 60 years and above, 37% deaths in 45-60 age group while 11% in 26-44 years age group. In the gender distribution, 68% of people who died were men and 32% women.
— Hong Hong has reported 85 new virus cases and four additional deaths. Hong Kong saw cases spike in a new wave of infections, but new daily cases have now fallen back into the double digits. Authorities in the semi-autonomous Chinese city have ordered masks be worn in all public places, slapped restrictions on indoor dining, banned many activities and increased testing. China’s central government this week also sent a medical team to assist in anti-epidemic efforts and an exhibition center has been converted into a makeshift hospital. China’s team of experts will also assist Hong Kong in planning and building a temporary hospital. Hong Kong has recorded a total of 3,775 cases and 43 deaths from the virus.
— China reported 27 new virus cases on the mainland Wednesday. Of those 22 were in the northwestern region of Xinjiang, whose capital Urumqi has been the center of China’s latest outbreak. Measures to contain the spread, including locking down some communities and limiting public transport, appear to have been effective and reported case numbers have gradually fallen. The remaining five cases were brought from overseas by Chinese travelers, the National Health Administration said. China has reported 4,634 deaths among 84,491 cases since the virus was first detected in the central city of Wuhan late last year. A total of 810 people are being treated in hospital for the disease.
— New Zealand’s unemployment rate showed a surprising improvement to 4% during the midst of the nation’s virus lockdown, although the headline number doesn’t tell the full story and joblessness is likely to increase in the months ahead. Still, the figure was far better than most people expected and came as welcome news to the government led by Prime Minister Jacinda Ardern ahead of a general election next month. The figures from Statistics New Zealand showed the unemployment rate in the quarter ending June fell from 4.2% in the previous quarter. But the number of hours worked also fell a record 10% and the number of people not in the labor force rose. Because people who aren’t actively seeking work are not counted as unemployed, the figures didn’t reflect many job losses because most people couldn’t search for jobs during the lockdown. And many workers have been protected by a government-funded wage subsidy scheme during the pandemic which is due to expire next month.
— A governor in Japan is drawing skeptical criticism after he touted a gargling product as effective against the coronavirus, an assertion that, despite its dubiousness, emptied some store shelves of the medicine. Shares of Shionogi & Co. and Meiji Holdings Co., which make Isojin, soared in Tokyo trading Tuesday after Osaka Gov. Hirofumi Yoshimura made the comments. Yoshimura referred to a study carried out by the Osaka regional government on a sample of just 41 people. Experts said such a study was inconclusive. Shionogi and Meiji shares were already coming down Wednesday, as subsequent Japanese media reports debunked Yoshimura’s claim.