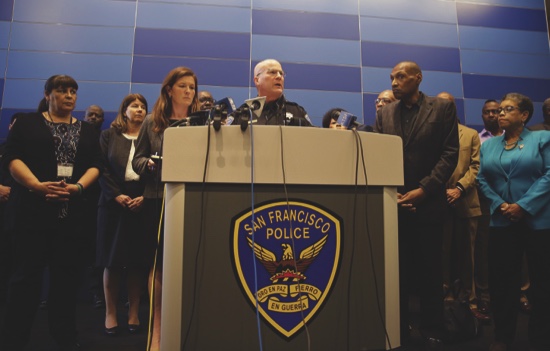 San Francisco Police Chief Greg Suhr, with his command staff and community and religious leaders behind him

San Francisco’s police chief said that he has ordered that all officers finish an anti-harassment class within the next month amid a racist texting scandal that has rocked the department already dogged by fatal shootings of unarmed minority suspects.
Flanked by religious and minority community leaders at a San Francisco press conference, Chief Greg Suhr also released more transcripts of racist and homophobic text messages first made available to The Associated Press along with inflammatory and inappropriate images found on former officers’ cellphones.
It’s the second texting scandal since 2014 in a department that is attempting to diversify its officers to reflect the San Francisco culture and population. The department of 2,100 was led by an Asian-American woman and a black man before Suhr took over five years ago.
About half the officers are white, roughly reflecting the white population in San Francisco. Asians make up a third of the city population, but account for about 16 percent of the officers. Close to 9 percent of its officers are black, exceeding a city population of 6 percent.
Suhr says he has no plans to resign and Mayor Ed Lee says he supports the chief.
Lee sent an email letter to the entire department of nearly 2,100 officers last week calling on them to report colleagues who display intolerant behavior.
Suhr said last week that two officers turned in by colleagues for suspected overtime abuse and unauthorized access of driving records are being investigated by the district attorney for possible criminal charges.
“I support Chief Suhr,” said the Rev. Amos Brown, president of San Francisco’s NAACP chapter.
Investigators say they found the text messages on the personal phones of the officers during criminal probes of former officer Jason Lai and retired Lt. Curtis Liu.
“The vast majority of police officers are shaken,” Suhr said in an interview with AP. “The expectations have never been higher, so when officers do something like this, the disappointment can’t be greater.”
The names of those involved in the racist and homophobic conversations Suhr provided were redacted. Suhr said that Lai, Liu and an unidentified third former officer sent and received many of the messages. He also said several civilians were involved in the conversations.
Lai resigned earlier this month and Liu retired last year. Both are Chinese Americans, according to Suhr. The unidentified officer, who is white, also resigned. Suhr declined to identify a fourth officer implicated in the texting scandal who is facing dismissal before the city’s Police Commission.
The newly provided transcripts denigrate minority suspects with racial slurs and insult colleagues perceived to be gay. The texts ridicule blacks in Ferguson, Missouri, where police shot and killed an unarmed black man.
They discuss a shootout among black men and the shooting of an armed suspect by police. In doing so, they appear to ridicule the shooting death by police in 2014 of a mentally ill man carrying a stun gun officers mistook for a handgun.
They also exchanged photographs with racist captions.
One photo depicts a white man playfully spraying a young black child with a garden hose. The caption calls the boy a racial slur.
There’s a photo of smoke rising above San Francisco and guesses are exchanged about the origins of the fire.
“Must be Korean BBQ,” quips one.
“I heard was a slave ship!!” quips another.
Liu’s attorney Tony Brass said that the texts investigators turned over to him show Liu only on the receiving end. Brass said he may not be privy to all Liu’s texts, only the ones that pertain to his criminal case. Paul Elias, San Francisco, AP