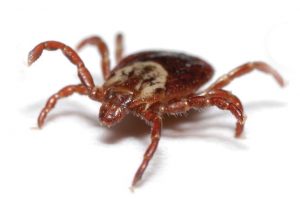 Tick fever, or canine Ehrlichiosis, is a canine disease spread by the bite of the brown dog tick. Ehrlichiosis is a serious disease that may cause brain damage and severe anemia. Ehrlichiosis can be treated with tetracycline based drugs. Here’s what you should know about the symptoms and treatment of Ehrlichiosis.

Diagnosing ehrlichiosis can be tricky during the initial two or three weeks of infection. Blood tests for canine tick fever check your dog’s blood for antibodies against this disease, but your dog’s Immune System won’t produce those antibodies until two or three weeks after the infection takes hold. For this reason, blood tests performed during the initial phases of infection can come back falsely negative. If an initial blood test for Ehrlichiosis comes back negative, your vet may order a second confirmation test a week or two later.

Ehrlichiosis is treated with doxycycline based drugs. Most dogs will need antibiotics for 10 to 30 days, but some dogs may require medication for up to four months.

Canine tick fever is easy to prevent. Keep any ticks out of your environment and away from your dog. The best way to do this is with a spot on flea and tick repellent like Frontline, Revolution or Advantage. These products keep ticks from biting your dog.

If you don’t use a product like Frontline or Advantage, check your dog daily for ticks. The longer ticks feed from your dog, the more likely he is to get sick. Remove any ticks immediately and watch your dog carefully for symptoms of Ehrlichiosis. By Dr Ruan Du Toit Bester