ASK THE VET | Ear Mites in Dogs and Cats 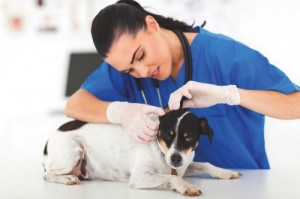 70% of all skin problems I see originate from infected or dirty ears. Today I will focus on “Ear Mites” a common problem in a lot of cats and dogs that owners don’t pick up till its too late. There are several types of mites that can invade the ear canals of dogs, puppies, cats, and kittens. The same mite can affect both dogs and cats. In the puppy and kitten, the most common ear mite is Otodectes cynotis. It is not important in the diagnosis and treatment of ear mites to identify the species of mite. Regardless of the mite species involved, we usually refer to mites of the ear canal simply as ear mites. Contrary to popular belief, however, is the fact that ear mites can live anywhere on the animal’s body. 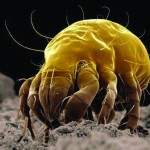 How are the mites transmitted?
Ear mites are extremely contagious. They can be passed from the mother animal to her offspring. Additionally, the mites are easily spread to other pets within the household including cats, dogs, rabbits, hamsters, gerbils, mice, ferrets, etc. Humans are not affected.

What are the symptoms? 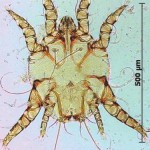 Puppies and kittens with ear mites will scratch around their ears and/or shake their heads. The amount of scratching and shaking depends on the severity of the mite infestation. With more advanced infestations, the ear canals will bleed and either fresh or dried blood will appear inside the canal. Dried blood resembles coffee grounds. If you peer into your pet’s ears and notice a build-up of a material that looks like coffee grounds, then your pet probably has ear mites, although a bacterial and/or yeast infection is also a possibility. This is quite common in Macau due to the humidity.
Ear mites are very common, but still serious. Left untreated, they severely damage the ear canals and eardrum and can cause permanent hearing loss.
If mites spread out of the ears to other areas of the body, the animal may or may not scratch the area.

What is the management?
Various commercial ear preparations are available to kill the mites. These products contain an insecticide, usually pyrethrin. Ear products without an insecticide will not kill the mites. Ivermectin,fipronil (Frontline), and selamectin (Revolution) have also been used by some veterinarians.Milbemycin (Milbemite) and Acarexx, a form of ivermectin are approved for the treatment of ear mites in cats. Depending upon the medication used, the ears may need to be treated two to four weeks until all mites are killed. As previously mentioned, many ear mites live all over the body, including the feet and tail. These areas should also be treated. Most products designed for fleas and ticks such as sprays, dips, and shampoos, which contain one of the above ingredients will be effective. Be sure to use products approved for use on dogs and cats, and to treat the tail. This is because while sleeping, the tail is curled around the puppy or kitten’s body where it lies in close contact with the ear. Because mites are very easily transferred between pets, it is best if all pets in the household receive simultaneous treatment. Most types of mites do not survive long off the pets, so the treatment of the house or apartment is usually not necessary.

Can I get ear mites from my pet?
Ear mites are not considered to be a zoonotic disease (disease which can be transmitted from animals to humans).